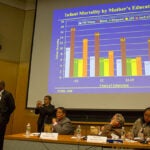 In recent years investigators have discovered that breast tumors are influenced by more than just the cancer cells within them. A variety of noncancerous cells, which in many cases constitute the majority of the tumor mass, form what is known as the “tumor microenvironment.” This sea of noncancerous cells and the products they deposit appear to play key roles in tumor pathogenesis.

Among the key accomplices in the tumor microenvironment are mesenchymal stem cells (MSCs), a group of adult progenitor cells, which have been shown to help breast cancers maneuver and spread to other parts of the body.

Now, new research sheds further light on how this spreading is happening. Led by investigators at Harvard-affiliated Beth Israel Deaconess Medical Center (BIDMC), the research demonstrates that the lysyl oxidase (LOX) gene is spurred to production in cancer cells as a result of their contact with MSCs, and once produced, can help ensure the spread of otherwise weakly metastatic cancer cells from primary tumors to the lung and bones. Described online in the Proceedings of the National Academy of Sciences (PNAS), this discovery not only provides key insights into the basic biology of tumor formation, but also offers a potential new direction in the pursuit of therapies for the treatment of bone metastasis.

“We don’t have a lot of therapies that can target breast cancer once it has metastasized, particularly once cancer cells have lodged in the bone,” says senior author Antoine Karnoub, an investigator in the Department of Pathology at BIDMC and assistant professor of pathology at Harvard Medical School. “When breast cancer cells reach the skeleton, one way in which they cause damage is by breaking down bone tissue, which results in the bone’s rich matrix releasing numerous factors. These factors, in turn, feed the cancer cells, setting in motion a vicious cycle that leaves patients susceptible to fractures, pain, and further metastasis.”

MSCs are nonhematopoietic progenitor cells predominantly produced in the bone marrow that generate bone, cartilage, fat, and fibrous connective tissue. They additionally support immune cell development and are recruited to inflammatory sites throughout the body to help shut down immune responses and regenerate damaged tissues, as might occur during wound healing. Several years ago, as a postdoctoral researcher at the Whitehead Institute of the Massachusetts Institute of Technology, Karnoub began exploring the idea that MSCs were migrating to tumors after mistaking the cancer sites for inflammatory lesions in need of healing.

“We discovered that once MSCs had reached the tumor sites, they were actually helping in cancer metastasis, causing primary cancer cells to spread to other sites in the body,” he explains. In this new research, Karnoub wanted to find out — in greater molecular detail — how breast cancer cells respond to the influences of MSCs in order to better understand how cancer cells cross talk with recruited cells in the microenvironment.

His scientific team first embarked on a straightforward experiment. “We took two dishes of cells, cancer cells and MSCs, and mixed them together,” Karnoub explains. After three days, the researchers removed the cancer cells and studied them to see how they had changed.

“We found that the lysyl oxidase gene was highly upregulated in the cancer cells,” Karnoub says. “It turns out that when a cancer cell comes in contact with an MSC, it flips on this LOX gene, turning it up by a factor of about 100. So our next question was: What happens to the cancer cells when they encounter this boost of LOX that they themselves have produced?”

The answer, as revealed in subsequent experiments, was that LOX was setting in motion a cell program called epithelial-to-mesenchymal transition (EMT). During EMT, cancer cells that usually clump together undergo a transformation into cells that exhibit decreased adhesion to their neighbors and go their own way. As a result, these cancerous cells are able to migrate, significantly enhancing their ability to metastasize.

“When we put these cells back into mice, they not only formed tumors that metastasized to the lung, but also to the bone,” says Karnoub. “This makes you wonder whether the cancer cells in primary tumors have become so acclimated to interacting with bone-derived MSCs that they can now grow more easily in the bone once they leave the tumor.”

The investigators also wanted to find out if, by going through the EMT process, cancer cells were also acquiring the phenotypes of another highly aggressive feature of malignant cancer cells, those of cancer stem cells within the cores of most tumors.

“Cancer stem cells are believed to be responsible for the resurgence of tumors following chemotherapy treatment, and an increasing body of science is focused on understanding how CSCs function and how they originate,” says Karnoub. “The processes of EMT and CSC formation have been described as being closely coupled, and we asked whether LOX might be regulating CSC phenotypes, just as it was regulating EMT. To our surprise, this was not the case. This tells us that pathways that were once thought to be intimately intertwined and commonly tweaked may, in fact, be separate, and now we can start to tease out the respective circuitries with a bit more clarity.”

Lastly, the investigators identified the mechanism that was enabling LOX to be turned on from outside the cell, a set of molecules called hyaluronic acid (HA) and CD44. “It turns out that the MSCs provide the HA while the cancer cells provide the CD44, and they work in tandem like a lock and key to upregulate LOX expression,” explains Karnoub, adding that antagonists to HA and CD44, already in extensive investigations and clinical exploration, might be of increased use from a clinical standpoint, perhaps in managing bone metastasis.