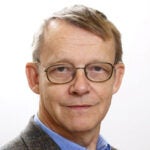 The two winners of this year’s Nobel Prize in physics, who were announced today, have more than quantum optics in common. They have early ties to Harvard University.

Serge Haroche, a professor at Collège de France in Paris, was a Loeb Lecturer at Harvard in 1980 and a visiting professor in 1981. He last visited Harvard on Feb. 27 for a colloquium sponsored by the Department of Physics. His lecture was titled “Juggling with Photons in a Box to Explore the Quantum World.”

Wineland’s doctoral adviser was Norman F. Ramsey Jr., the 1989 winner of the Nobel in physics. (Harvard’s Physics Department has 10 Nobel Prize winners.) Ramsey, who died in 2011, conducted the research that provided the theoretical underpinnings for the atomic clock.

Atomic clocks based on the radioactive element cesium remain the world standard for measuring time. But Wineland and his team in Boulder have built a clock based on electrically charged atoms — ions — that are trapped by electric fields at extremely low temperatures. The resulting optical clock — called that because it is based on the building blocks of visible light — is a hundred times more precise.

Scientists estimate that if an optical clock had started measuring time at the Big Bang 14 billion years ago, it would be off today by only about 5 seconds.

Haroche has connections to other American universities, as well. He was a visiting scholar at Stanford University three times during the 1970s, a visiting scientist at the Massachusetts Institute of Technology in 1979, and a part-time professor at Yale University from 1984 to 1993.

After leaving Harvard in 1970, Wineland did postdoctoral work at the University of Washington in Seattle. In 1975, he joined the National Bureau of Standards, now known as the National Institute of Standards and Technology.