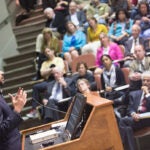 The narrative of cancer

In a critical breakthrough in unraveling how molecular “motors” ferry proteins and nutrients through cells, Harvard scientists have produced high-resolution images that show how the “foot” of dynein — one of the most complex, but least understood such motors — binds to microtubules, the cellular tracks it travels on.

As described in a Sept. 20 paper in Science, a team of researchers, led by Andres Leschziner, an associate professor of molecular and cellular biology in Harvard’s Department of Molecular and Cellular Biology, and Samara Reck-Peterson, an assistant professor of cell biology at Harvard Medical School, showed that dynein’s foot dramatically changes shape as it binds to the microtubule. Those chemical changes, Leschziner said, suggest that the foot acts as a sensor to aid coordinated movement.

“In some ways, the idea that dynein is binding to the microtubule is not especially interesting,” Leschziner said. “What is truly exciting about this research is the finding that, because the foot changes shape as it binds, that somehow tells the ‘head’ what is happening. This finding completes the picture of how that communication works.”

Understanding how that communication works, Leschziner said, is critical because, unless dynein’s walk is highly coordinated, the protein motor will simply fall off its microtubule track, and its cargo will be lost.

That cargo, he explained, is critical to proper cell function.

Though some cells can rely on diffusion to deliver proteins and nutrients throughout the cell, others — such as a neuron that ranges from your spine to the bottom of your foot — are simply too large for the process to work. They instead rely on molecular motors like dynein to deliver cargo to where it’s needed.

“If you only relied on diffusion, it would take years for a molecule to diffuse to where it needed to be,” Leschziner said. “Microtubules act like freeways, allowing dynein and other molecular motors to quickly deliver proteins and nutrients where they’re needed.”

Researchers began by mixing two purified solutions — one made up of dynein “feet,” the other of microtubules — causing the feet to bind to the microtubules. A tiny amount of the resulting solution was then placed on a nanofabricated copper grid and embedded in a solution of vitreous ice.

Using an electron microscope to capture images through the nanoscale holes in the copper grid, the researchers captured hundreds of images showing microtubules — and their attached dynein feet — in dozens of positions. Then they created a three-dimensional model showing how the foot binds to the microtubule.

“The process is similar to the way a CT [computerized tomography] scan works — it takes images from different angles which can be projected into a 3-D image,” said Redwine. “In our case, we used computational tools to figure out how all those different views we had captured were related.”

Armed with that new model and earlier models that showed the foot in its unbound state, researchers relied on molecular dynamics simulations — a process that calculates the interactions between atoms in molecules over time — to show how the unbound foot could transform into the bound configuration and back again as the motor moves.

To confirm that their model was correct, Leschziner and his team took the research one step further, introducing mutations that computer simulations predicted would make dynein much more likely to bind to microtubules. The researchers predicted this would result in a dynein that walked farther along its track before dissociating.

“What we found is that it walks slower, but it walks much further,” Hernandez-Lopez said. “In the paper, we suggest that may be a problem because dynein works together with other molecular motors that run on the same track but pull in the opposite direction, in a finely tuned tug of war. If you have a dynein that never lets go, that will cause a problem if the system needs to be dynamic.”

Going forward, Leschziner said, he wants to understand the evolutionary issues that have impeded dynein.

“We expected dynein to want to bind to the track all the time, but it seems to have evolved a system in which it isn’t bound as tightly,” he said. “What’s interesting is that dynein is optimal in terms of what it does in a cell, but that means being suboptimal in terms of its motor properties.”