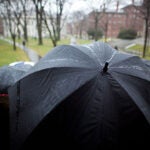 It’s been an unqualified success since its launch four years ago, and now Harvard University’s Graduate Commons program is growing.

At the start of the fall 2012 semester, the popular Harvard University Housing program aimed at providing an interdisciplinary, community atmosphere for its residents was expanded to include two new buildings — Peabody Terrace apartments and the Cronkhite Graduate Center, more than doubling the number of units included in the program. The program was launched in 2009 at 5 Cowperthwaite St. and 10 Akron St.

“This program gives graduate students who live with us an opportunity to connect with their peers and create a community in a way that wasn’t available to them in the past,” said Lisa Valela, associate director of the Graduate Commons Program. “Through a variety of social and academic programs we bring together students from graduate programs all across Harvard. This gives them a chance for interdisciplinary networking, an opportunity to hear from professors and scholars in other Schools, and a place to socialize in their own ‘home.’”

Programs run the gamut from cooking classes to kayaking expeditions to “Meet the Scholar” lectures to informal coffees and dinners with the resident faculty directors.

The expansion of the program to Peabody Terrace helped drive the direction of that property’s recent renovation. Completed over the summer, the work included a major overhaul of the Peabody Terrace Common Room to create a light-filled event space featuring a large meeting area with audiovisual capabilities; a smaller, more intimate meeting space; a full kitchen; and an office for the associate director of the Graduate Commons Program.

Exterior work included renovating a courtyard with a large, open granite terrace space that overlooks the Charles River, and preserving and resetting the brick/granite in the building’s central courtyard. New lawn, lighting, and irrigation systems were also installed, as well as new exterior seating and bamboo planters.

“The new space has created an enhanced amenity at Peabody Terrace, both in support of the Graduate Commons Program, and for the Peabody Terrace community in general,” said Chris Packard, whose firm, Northstar Project & Real Estate Services, designed the renovation and carried out the construction. “Though the space remains at the same elevation, the combination of modifications to the exterior courtyard and the interior renovations to the common room have in a sense lifted the ‘sunken’ common room by creating a space that feels light with great views of both courtyards and the Charles River.”

The physical changes to the Peabody Terrace building is only part of what the program offers to students.

One of the keys to the success of the program, said Garth O. McCavana, dean for student affairs in the Graduate School of Arts and Sciences (GSAS), was the appointment of faculty directors who can act as “the intellectual head of the community — who can call on colleagues to give small talks and lectures that could give students the opportunity to meet with world-renowned scholars in a small group.”

At Peabody Terrace, McCavana said, the faculty director position has been filled by James and Doreen Hogle, who will also continue to serve as the co-masters of Dudley House, the graduate student center at GSAS.

“They are the perfect choice for the expansion of this program,” McCavana said. “Their experience with Dudley House means they’re already well-attuned to the needs of graduate students, and in this role they will be able to extend that expertise to serve a wider community of students.”

Expanding the program to include the Peabody Terrace apartments is an idea that “just makes sense,” said James Hogle, who is also the Edward S. Harkness Professor of Biological Chemistry and Molecular Pharmacology at Harvard Medical School.

“We know graduate students are interested in exposure to faculty and they appreciate having a community,” he said. “By expanding to Peabody Terrace, I believe we can promote interdisciplinary collaboration between students and provide them with programs they will find enjoyable and intellectually stimulating.”

With more than 500 residents, including many children, Peabody Terrace will also include a good deal of programming aimed at families.

“We’ve been very pleased to see a number of families and children playing in the courtyard areas,” James added. “In addition to the academic programming that we’re planning we’d like to organize some family-friendly events.”

Aside from scholarly events, Doreen Hogle said she believes the program offers students a valuable chance to interact across cultures.

“This isn’t just about academics,” she said. “There is also a cultural aspect to the community we are working to build. We want to be able to bring the diverse cultures represented here at Harvard together as well and build a community that stretches across those cultural differences.”

Though intended to foster community among graduate students, the program has benefits beyond students’ social lives. As barriers between scholarly disciplines are rapidly falling, McCavana said, the program’s interdisciplinary nature will be a boon to students as they begin their professional lives.

“We have already seen people start collaborations that would not have happened had they not met in this community,” he continued. “This program is wonderful socially, but intellectually, this is the full embodiment of the ‘One Harvard’ ideal — it’s an intellectual base where people can interact with each other and where cross-pollination of ideas is the norm.”