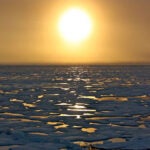 Project aims to find distant examples, on astronomy’s next frontier

Now that astronomers routinely find far-flung planets orbiting other stars, a fellow at the Harvard-Smithsonian Center for Astrophysics (CfA) is pushing into a new frontier in detecting bodies outside our solar system: distant moons.

“It’s the next big thing in the field. We’ve found rocky planets as small as Mars. The big challenge now is trying to find a moon,” said David Kipping, the Carl Sagan Fellow at the CfA and Harvard College Observatory.

Kipping heads the Hunt for Exomoons with Kepler (HEK) project, a year-old effort that joins six astronomers from several institutions in the search for moons outside our solar system. Despite the project’s tender age, it already has had some success, with team members publishing two academic papers, including the first detection of an unseen planet based on its effects on a second planet crossing the face of its star. The first detection of a moon outside our solar system — a significant astronomical milestone — remains ahead.

The project uses publicly available data from the Kepler Space Telescope, an orbital telescope dedicated to the search for exoplanets, or planets outside the solar system. Launched in 2009, Kepler has been a smashing success, finding thousands of candidate planets. Kepler has also played a role in transforming our understanding of the universe, from one in which planets circling other stars were either scarce or hard to detect, to one in which planets are common, with billions in our Milky Way galaxy alone.

Kipping wants to do the same thing for moons.

Moons are common in our solar system, with 176 circling six of the eight planets. Sixty-seven orbit Jupiter alone. With moons so common here, it would be reasonable to expect them to be equally common in other solar systems, making them potentially significant players in our understanding of the galaxy.

“You look at our system and say moons have to be common. But we don’t know whether that’s true empirically,” Kipping said. “We have no prejudice about whether we’ll find these things or not. Either way, we should be able to say something profound about the universe.”

Astronomers’ moon-finding ability is limited by current technology. Although Kepler represents a giant step forward for planet-detecting telescopes, it was designed to find Earth-like planets, ones that could potentially harbor life. Bodies much smaller than Earth, a category that includes every moon in the solar system, are outside its detection abilities.

But just because jumbo moons don’t exist here, that doesn’t mean they don’t exist out there, Kipping said. And if they do, they are most likely circling giant, gaseous planets, like our Jupiter.

Astronomy Professor Dimitar Sasselov, a principal investigator of the Kepler project and Kipping’s adviser at the CfA, agreed that Earth-sized moons, unknown here, might be found in other places. In fact, he said, there’s an analogous example among exoplanets. Our solar system is missing a whole category of planets found elsewhere, rocky bodies up to 10 times Earth’s mass, called “super-Earths.”

“We shouldn’t take our solar system as an example of how big moons should be,” Sasselov said.

Those interested in life beyond Earth may also be interested in Kipping’s hunt. Although the Earth’s moon is lifeless, there’s no reason why a large moon couldn’t support life. In fact, Jupiter’s moon Europa — thought to be covered by oceans and ice — is considered a place to look for life.

The moons large enough to be detected by Kepler will also be large enough so their gravity will hold onto an atmosphere, Kipping said. If one of those moons is orbiting a planet in their star’s habitable “Goldilocks zone” — not too hot and not too cold — it could be a place where life might arise.

To find a moon, Kipping starts with the Kepler planet-search data. Kepler discovers planets by examining the light from a star. When a planet crosses in front of it, that light dims by a tiny, but detectable amount.

By examining the amount of light coming from the star over time, Kepler’s instruments can detect these slight variations in starlight. From the reams of Kepler data, the HEK team has focused its efforts on a dozen likely candidates. Kipping hopes to have the analysis done in time to present results at the American Astronomical Society meeting in January.

“It is at the edges of what is possible, but that’s what science is about,” Sasselov said.