From concerts to context 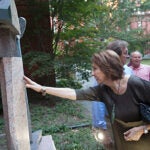 To prosper, classical orchestras should educate as well as play

Much has been said and written about the decline of the American classical music orchestra. Increasingly, disinterested listeners and a struggling economy have kept audiences and donors away from concert halls, say skeptics.

Those skeptics have compelling evidence, such as the Philadelphia, Syracuse, and Louisville orchestras, which all have declared bankruptcy in recent years.

But there are possible solutions, according to cultural historian and author Joseph Horowitz, an authority on the issue. In large part, he said, the answer involves reimagining how orchestras can “expand the circle” of their influence by partnering with scholarly organizations and other cultural institutions.

Tracing the history of the classical orchestra, Horowitz, whose most recent book is titled “Moral Fire: Musical Portraits from America’s Fin-de-Siècle,” described the characteristics that made orchestras in the 19th and first half of the 20th century viable and unique. Unlike today, when a great collection of musicians is available to a listener with the touch of an audio control, no one a century ago could readily hear an orchestra.

At the time, he told an audience in Harvard’s Paine Hall on Thursday, there were only a handful of great orchestras in the United States, one of which was the Boston Symphony Orchestra, founded by Henry Lee Higginson in 1881. In addition, Horowitz said, classical music audiences from the era also cared deeply about contemporary music and local composers.

“Everyone took it for granted that an American canon would emerge,” said Horowitz. “They could not have imagined,” he added, “that our musical culture would remain fundamentally Eurocentric.”

The absence of an American classical canon, and a musical shift in the creative impulse toward popular music and jazz, contributed to a decline in interest in classical orchestras after World War I.

Only recently have orchestras come to understand that they need to adapt to fundamental changes in the broader cultural environment, and that such changes affect the way they do business, raise money, and attract audiences. Such shifts, Horowitz said, require fresh initiatives, such as his “Music Unwound” project, a consortium of five orchestras backed by a $300,000 grant from the National Endowment for the Humanities.

The five orchestras are developing cross-disciplinary thematic concerts, partnering with high schools, art museums, and universities on areas such as outreach programs and music festivals, and engaging scholars in discussions. They are making “education the spine” of their missions, said Horowitz.

“Orchestras need to think of themselves more as instruments of education and less narrowly as purveyors of concerts,” he said. “It will happen, and it’s happening already.”

Horowitz’s talk was one of two discussions sponsored by Harvard’s Department of Music aimed at exploring American classical music. Scholars gathered Wednesday at the Barker Center for the second event titled “Classical Music in Crisis.”  The panelists included Horowitz; Mark Volpe, the director of the Boston Symphony; Jeremy Eichler, music critic for The Boston Globe; and Lloyd Schwartz, music critic for The Phoenix.