For whom Josh Bell tolls 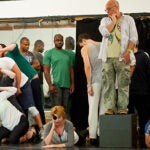 In on the act

As a boy, poet Josh Bell says he was “quiet, timid, nervous … the same as I am now.”

So it’s a tad surprising that Bell, the new Briggs-Copeland Lecturer on English, has been inspired by bad boy and Mötley Crüe vocalist Vince Neil for the past few years, turning the onetime god of late ’80s hair metal — eponymously bedecked in studded leather and a rotating assortment of women and bandanas — into a poetic vehicle to explore, well, Josh Bell.

“All the poems I write are autobiographical,” he admits, “but I can’t get interested in a poem if I start talking about anything actually happening in my life verbatim. So I always have to create a distance in order to be able to write at all. It’s easier for me to get interested in myself if I see it from the outside somehow.”

The Vince Neil poems make up Bell’s as-yet-untitled second book, which he’ll likely publish during his five-year stint at Harvard. His first collection, “No Planets Strike,” has become a sort of cult classic, composed, in part, of  “a series of poems that were sort of an epic sequence, but an epic in reverse,” Bell explains. “So instead of the hero going down to the underworld to speak to the dead, I had one of the dead come to the over-world to speak to the living.” In addition to the zombie poems, Julia Roberts has a poem dedicated to her, and a character named Ramona appears again and again.

Josh Bell, Briggs-Copeland Lecturer on English, talks poetry and reads some of his work for the Gazette in his Barker Center office. Hear and read the full poems: “Hidden Lake” and “While Josh Sleeps”

The affable Neil continues Bell’s affinity for winding sagas as the rocker rants his way through Chinese dinners and flights to writers’ conferences and, in one poem, accompanies Josh (a character who “is me, but also isn’t”) to a dinner with poets where he “starts speaking strangely.”

“I wanted Vince Neil because Mötley Crüe peaked at a certain time, and Vince Neil is still out there kicking, and I like that idea of a hero, post-heroic,” Bell says. “So I wanted to borrow him. I like him for the idea of potential creepiness; I like him for the leatheriness. I don’t speak easily. In social situations, I get a little nervous or anxious or off to the side, and I wanted this figure who would walk into those situations and speak ridiculously but confidently. He has a license I feel like I don’t have a lot of the time.”

Growing up in Terre Haute, Ind., Bell had aspirations in the literary world. But before meeting the poet Rodney Jones, Bell envisioned himself behind the scenes as a professor or literary critic.

Bell attended Southern Illinois University Carbondale, where Jones has taught since 1985. “I’d always written, but up until meeting Rodney, for some reason, I realized at some point that people actually sit down and write the things that you see — poems, stories, movies, that kind of thing. That happened to me a little too late. And with Rodney, I realized there are actually living poets who existed,” recalls Bell.

“Rodney used to take us fishing all the time. And to see him, at the back of the boat, fishing, and knowing he was famous to some people was a big moment for me. A few years later he won the Kingsley Tufts Award, and I was like, ‘Whoa, that guy’s just like sitting in his boat in southern Illinois right now.’ ”

During college, Bell followed a girlfriend along on her fellowship to Italy, where he randomly discovered a book of Frank O’Hara’s poems that another student had left behind.

“It was the first time I’d read O’Hara. So with Rodney’s example, and O’Hara, and my exile from America, I just started writing pretty well, and I wrote the poems then that I included in my application to get into Iowa.”

At the prestigious Writers’ Workshop at the University of Iowa, Bell worked with Jorie Graham, now the Boylston Professor of Rhetoric at Harvard. “I was Jorie’s student at Iowa, and it’s great to be working with her again,” he says.

Before arriving at Harvard, Bell taught at Columbia University, where he worked with former Briggs-Copeland poet Lucie Brock-Broido. “Lucie was the one who talked me into applying for the Briggs-Copeland,” he says, “and I owe her a lot.”

In his new office at the Barker Center, Bell can be found some afternoons reading by lamplight, preparing for the two creative writing workshops he is teaching this semester.

Bell is glad to have left New York, which he calls “a hard city for me to live in.”

“You feel like you have to put on armor and do battle to go get groceries. Cambridge is quieter, and I like it a lot,” he says.

He began teaching at Columbia during the third year of a Ph.D. program at the University of Cincinnati, where he is still enrolled. His dissertation will be the Vince Neil poems, but he’s in the midst of completing a few last credits.

“When I took the Columbia job, I learned that I’d thought of teaching as a means to an end, or just a way to be able to be a poet and survive. But at Columbia and at Harvard so far, I’ve really come to love teaching,” he says. “It’s a lot of fun. Creative writing classes create an atmosphere where people feel like they can try anything out, and they can experiment, and they won’t get hit for it. I think that the best thing that you can do is create that kind of an atmosphere. And teaching helps me put words to some of the things that I think about poems that I never would’ve allowed myself to think about before.”

Bell is even looking forward to murderous Boston winters, the solitude of which may aid him in his writing.

Sometimes, in New York, when Bell felt like his tiny apartment was trying to strangle him, he’d head to the movies, which doubled as entertainment and an office.

“I love movies, and I tend to have a cinematic conception of the poem anyway,” he says. “A poem is a really great place for a director who’s not inclined to be a director. As a poet, you’re producing and giving direction and creating this visual feel, and it’s very similar to making movies.”

Bell used to require whole days of nothing on the docket to begin writing. “My process was getting a little too precious,” he says.