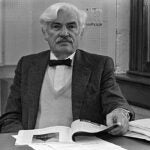 Dean Shinagel makes a difference in lives of Illinois fourth-graders

It’s an endearing and enduring relationship. For nearly five years, Harvard Extension School Dean Michael Shinagel and groups of 9- and 10-year-olds from a suburban Chicago elementary school have been great friends — by way of the U.S. Postal Service — and it’s the envy of the entire school.

“When I told the children that you [Michael Shinagel] are the dean of continuing education, they asked me what that means. I replied that you ran the school for adults who continue their education. One of the boys raised his hand and asked, ‘You mean to tell me we’re NEVER done?’” — Kathy McAvoy of Frank C. Whiteley Elementary School

In August 2007, Frank C. Whiteley Elementary School, a National Blue Ribbon School in Hoffman Estates, Ill., a northwestern suburb of Chicago, joined a nationwide program called No Excuses University with the purpose of raising the level of expectations for every child to attend college by exposing them to powerful college symbolism. Each classroom “adopted” a university to research and follow, hung college flags and banners on their classroom doors, and found a sponsor from their chosen university to in turn “adopt” their class. Sponsors typically become pen pals who write letters of encouragement to the students, a key component of the program, and include motivational themes such as setting goals, perseverance, integrity, character, and doing your best.

Thirty-one-year teaching veteran Kathy McAvoy chose Harvard University for her fourth-grade class, as several of her students had said they would like to attend Harvard in the future. She knew that Harvard was a good fit as it focused on creating success and access for all to higher education, the heart of No Excuses University.

She and her students began a writing campaign.

“We took pictures of everyone dressed in crimson and white, and sent a [child’s] handwritten letter and picture of my class to each dean at Harvard,” says McAvoy. “Several deans offered us grad school students to be pen pals, but then I received an email from Dean Michael Shinagel — he adopted us — and [he] has been our pen pal ever since. When we first Googled him, the children were so excited to see photos and information about him on the Internet. And I was quite impressed that someone as important as he is would do something like this for a group of kids he’d never met!”

On the entry wall to McAvoy’s classroom is a shrine of sorts to all things Harvard. Atop a large white letter “H” is a photo of Shinagel, and below, Harvard brochures, Harvard banners, photos from the dean’s travels around the world, and copies of letters he has written to the class.

A few times each semester, the dean writes a letter to McAvoy’s class and tells them about things that are happening in his life — both professional and personal — such as his travels abroad, important people he has met, special events on the Harvard campus, or the antics of his dog, Quincy. Each letter gives McAvoy topics to incorporate into her lesson plans and an opportunity for the students to practice their writing, spelling, and handwriting when they write back. In his letters, Shinagel encourages their writing and comments on improvements he’s observed.

Shinagel’s travels have enhanced McAvoy’s classroom in many ways. He once sent a brochure of a train trip he took from South Africa to Victoria Falls, and the class Googled the places he visited, following his itinerary through South Africa. Another time, after traveling to the Middle East, he sent photos with notes on where they were taken and their historic significance, which the class then researched. He even sent a photo of himself and his wife sitting side by side on donkeys! (The kids thought this was “Awesome!”)

Best of all, according to the children, was a photo of Harvard Extension School’s Centennial Celebration cake made in the image of 51 Brattle St. Shinagel included information about the bakery where it was made — that it was the same bakery that made the wedding cake for John F. Kennedy and Jacqueline Bouvier. “We loved researching that bakery,” says McAvoy.

McAvoy admires the eloquence of the letters her class receives but says the best thing about being pen pals with Shinagel is his ability to include personal information that is of interest to 9- and 10- year-olds. She says hands down, his most famous letter was from Valentine’s Day 2008. The dean mentioned his dog, Quincy, and getting a valentine from him (via his wife). “That was the most exciting response ever,” McAvoy says. The dean received so many questions about Quincy that he sent a photo and the actual Valentine’s Day card he received from his dog, and the children all asked for copies to show their parents. “To have a dean at Harvard University reach out and touch the children’s lives in this way was astonishing to me.”

To read the full story, visit the Extension School website.