Crossing the river of myths 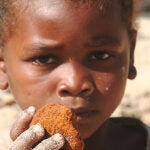 A few minutes before a recent lecture at Paine Hall, global health statistician Hans Rosling stood onstage, head down, and ran through his PowerPoint images. One showed the bespectacled Swede chest-deep in water. The caption read: “Help us across the river of myths.”

To Rosling, a physician and co-founder of the Gapminder Foundation, busting myths is a full-time job. It often keeps him on the road despite his professorship in international health at the Karolinska Institutet near Stockholm. One myth he often takes aim at is the misperception that the world is divided in two, with struggling, developing nations in one camp and wealthy industrial nations in another. The truth is, Rosling said, that the world is a complicated quilt of nations. We may miss how some of them achieve little-seen advances in income, infant mortality, literacy, and other measures of success.

To help uncover — and illustrate — the complexities, and surprises, that can be hidden within global statistics, Gapminder developed Trendalyzer, a statistics visualization software. It depicts the countries as a series of colored bubbles that can be “brushed” through the years to illustrate trends and changes.

In one demonstration, Rosling lined up a dozen countries on one side of the graphic and had them race across time, from 1800 forward, to show changing per-capita incomes. The balloons lengthened into wormlike tubes that wiggled across the decades. After World War II, Japan whizzed through the ranks faster than almost any other country. Today, little Tanzania and Ethiopia — among Africa’s developing leaders — are moving up fast.

“Our main innovation is to display time as movement,” said Rosling, who credited his son and daughter-in-law for the technical work. “It liberates the horizontal axis.” Besides, he said of entertaining visualizations, “When you make people relax like that, they are more open to information.”

Statistics that dispel myths among the community of nations also can dispel geopolitical ignorance, said Rosling. Or, as Harvard neurologist S. Allen Counter said of his longtime friend, “His main job is teaching us how to live together.” Counter added, “He brings us to the world.”

Rosling was at Harvard Oct. 25 for the second annual David K. Pickard Memorial Lecture, co-sponsored by the Harvard Statistics Department, the Harvard Foundation (directed by Counter), and the Harvard School of Public Health. It celebrates the late Pickard’s verve and brilliance as a teacher of statistics at Harvard from 1980 to 1985. “He was electrifying,” remembered fellow junior faculty member Victor Solo, who now teaches at the University of New South Wales, in Australia.

Pickard — dashing, handsome, with the energy of the schoolboy athlete he had been — had what notable teachers always possess, said acting Statistics Department Chair David P. Harrington: “the ability to speak clearly and listen carefully … and generosity of spirit.”

Rosling is a sort of traveling salesman for the importance of teaching statistics tellingly, and so was a natural choice for the Pickard event. During the lecture, he demonstrated his showman’s chops by crouching behind the lectern, then rising up dramatically to demonstrate the unseen progress of some nations. He rolled up his pant legs to make a point about the importance of font sizes in graphics. (Fonts too small make you look like a fool, he said.) And he wielded a comically long pointer. (Laser pointers, he said, are stupid.)

But Rosling did not go as far as he did at a TED talk in March 2007, when he swallowed a sword. A lithe man in his 60s, Rosling is a member of the Sword Swallowers Association International. (“We are not so many,” he said of practitioners, though “if you know how to do sword swallowing, you know how to communicate.”) An image of him swallowing a bayonet is the lead art on the Wikipedia “sword swallowing” entry.

The Gapminder team in Sweden occupies the theory department of the statistics business, Rosling offered mildly. “I run the road-show department.”

Part of Rosling’s persona — and his passion for conveying information in understandable ways — relates to his family background. He comes from generations of farmers and blue-collar workers, from a family in which no one had ever finished more than six years of school. He called himself, proudly, “a red-necked Swede” — an enthusiast for the practical arts and for the humble people who keep the gears of the world turning.

Right after medical school, more than 30 years ago, Rosling was a district medical officer in northern Mozambique. He uncovered an outbreak of konzo, a paralytic disease linked to using cyanide-rich cassava as a famine food. That work led to a Ph.D. and to a lifelong interest in the connections among a given country’s economy, agricultural practices, and public health. Statistics had piqued his interest further back, in his freshman year of university in Uppsala, Sweden. This science of gathering and analyzing data became the groundwork of Rosling’s passion: to acquire and disseminate what he called “a fact-based worldview.”

A myth about Africa

Rosling touched on one myth: that Africa is universally behind by every measure of progress. But “it’s country by country,” he said. Rural Tanzania might conform to that view, for instance, but urban Tanzania resembles much of Asia.

When facts override myths, said Rosling, they show surprises. For instance, he said, in 1948, the year of his birth, there were fewer than 1 billion children on Earth. By the year 2000, there were 2 billion. Rosling asked the Harvard audience: How many will there be by 2100? He offered three figures, asked for a show of hands on each, and then revealed a surprising  answer: 2 billion.

“No single question,” he said, “is more important” than the number of the world’s young by the end of the century. That low number negates a popular myth in global health circles: That “if you save the [lives] of poor children, you destroy the planet” because of overpopulation, said Rosling. “That’s not true.”

He flashed a picture on the screen showing families from Vietnam, Mexico, India, and Bangladesh, where two-child families are the norm. About 80 percent of families in the world have an average of two children each, said Rosling, a fact that hardly portends a future overwhelmed by offspring.

The world’s children by 2100 will only number 2 billion for another reason, he said: Prosperous Asia, where fewer than two children per woman is the norm: Taiwan and Hong Kong (1.1), for instance, and South Korea (1.3), Japan (1.4), and gigantic mainland China (1.6). Rosling wondered out loud why there are so few children in the most successful parts of Asia. He told a story that might offer an explanation, based on a chance meeting with a successful Asian woman in her 30s. “Yes, I think every day about children,” she told Rosling. “It’s the idea of a husband I can’t stand.”

Understanding statistics in an accurate way can dispel ignorance of the real facts of the world — an ignorance Rosling said characterized even his own highly literate Sweden. When asked to choose among a range of literacy rates among 20-year-olds in Tanzania, only 4 percent of Swedes chose the right answer (80 percent). Asked about the number of children per woman in Bangladesh (2.5), only 5 percent the same group knew the answer.

Onstage, Rosling crouched down and held one hand low. “My job,” he said, rising up straight, “is to raise the knowledge of the world.” That means not just having facts, but being able to analyze and visualize them. “Information,” Rosling added during a question-and-answer session, “is very far from understanding.”

He said that most people still view the world in terms that are too simple, and he illustrated that point with a story. “My neighbor knows 200 kinds of wine. I know two, red and white,” he said. “But my neighbor knows only two ‘countries,’ developed and not. I know 200.”

The Pickard Lecture is always more than a talk. It’s also an occasion for the Statistics Department to recognize its best young teachers. Among the junior faculty, Associate Professor Tirthankar Dasgupta was singled out. “Some of the best teachers are quiet,” said Harrington. “These are still waters that run very, very deep.” Dasgupta appeared onstage and said, “This University … many people dream of. I’ve had this dream come true.”

After the lecture, during a reception at Maxwell-Dworkin, Rosling stood among knots of people conversing intensely and at one point posed for a photo with two admirers, fashionable young women from Brazil. They put their arms around him. “Why didn’t this happen,” Rosling quipped, “when I was young?”

The teaching fellows stood nearby, pondering the lessons of Rosling’s kinetic lecture. “I like the idea of being physical,” said Stein.

“The way that he presented information really appeals to very diverse audiences,” said Horton. “That should be a goal for everyone.”