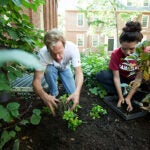 Digging the Yard work at Harvard

Running its unbeaten streak to 13 dating back to last season, the Crimson football team crushed a solid Cornell squad on Saturday, 45-13. The Crimson are now 4-0 on the season and have won all their games by double digits.

Harvard had scored three touchdowns by the second quarter, with quarterback Colton Chapple ’13 connecting to wide receiver Andrew Berg ’14 on them all, as Berg tied the school record for touchdown catches in a game.

In the third quarter, running back Treavor Scales ’13 ran 52 yards, carrying the ball four times. And in the fourth, Chapple rushed for a touchdown. Defensive backs Chris Splinter ’14 and Jaron Wilson ’14 each nailed down his first interceptions of the season.

Chapple completed 24 of 36 passes for 362 yards and rushed for 53 on the day. For his efforts, he was named Ivy League Offensive Player of the Week for the second straight week.

Harvard hosts Bucknell University on Oct. 13 at 3:30 p.m. to wrap up its three-game home stand. For a complete schedule, visit gocrimson.com.