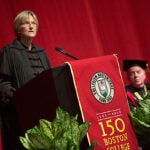 During the half-century that the Harvard Business School (HBS) has admitted women, only the family of James S.C. Chao can claim four daughters among those graduates.

On Friday, the Chao family announced its intention to honor that legacy — as well as the life of its late matriarch, Ruth Mulan Chu Chao — with a $40 million gift to the School to support student fellowships and to build a new executive education center on the Allston campus.

“What a wonderful thing to have a building on this campus that is both named for a woman and comes from the gift of four daughters,” said HBS Dean Nitin Nohria during an afternoon press conference at Kresge Hall, which will be razed to make way for the Ruth Mulan Chu Chao Center, set for groundbreaking in 2014. “It is so symbolic, so wonderful for us to be able to announce this gift in a year in which we’re celebrating 50 years of women graduating from Harvard Business School.”

The gift from the James Si-Cheng Chao and Family Foundation will allot $35 million toward construction of the Chao Center. The remaining $5 million will establish the Ruth Mulan Chu and James Si-Cheng Chao Family Fellowship Fund, which will provide financial assistance to deserving students of Chinese heritage.

The Chaos’ generosity was inspired not just by their personal connections to HBS, but by their mother’s passion for education. A native of China’s Anhui Province who immigrated to the United States from Taiwan with her husband and children, she once said, “The best dowry for my daughters is education,” and earned her own long-delayed master’s degree in Asian literature and history at 53.

The gift serves as a reminder of the important role of women at HBS and at Harvard through history, said Harvard President Drew Faust.

The Chao family represents “generations of dedication to what matters most here at Harvard to all of us, and that is the power of education to generate opportunity, to create possibility for everyone in our society, for women as well as men,” Faust said. “This is, of course, something that the Chao sisters lived here at Harvard Business School … education that is meant to serve others, education that is meant to build a better world.”

Members of the Chao family — among them former U.S. Labor Secretary Elaine Chao, M.B.A. ’79, and her husband, Senate Minority Leader Mitch McConnell, R-Ky. — were joined by HBS faculty, alumni, and staff, as well as friends of the School and representatives from the city of Boston, to celebrate the gift, one of the largest in HBS history and another boon to the Executive Education Program. (Just outside Kresge’s windows, construction of Tata Hall, which will provide housing for executive education participants, was under way.)

The Chao Center will serve as a space where the roughly 9,000 professionals who attend Executive Education programs each year can mingle with M.B.A. and doctoral students, said Elaine Chao, speaking on behalf of her father, who also attended.

“In an era of internationalization, the Ruth Mulan Chu Chao Center will be a gateway and convening site to the tens of thousands of Executive Education attendees from all over the world,” she said.

The center also will help to keep Boston at the forefront of the economy, said Mayor Thomas M. Menino.

“It demonstrates the direction that Boston is moving in as we build on our status as a leader in the global economy,” Menino said.

James and Ruth met during China’s mid-century upheaval, a period of multiple wars and rapid cultural change, Elaine Chao said. They reunited in Taiwan, where Ruth, the educated daughter of a distinguished family, had moved with relatives seeking safety.

When James, then a young but already accomplished sea captain, had the chance to go to America, Ruth, then pregnant with their third of six daughters, encouraged him to do so. Three years later, Ruth and the children joined him in New York. James went on to found the international shipping, trading, and finance outfit the Foremost Group, where he remains chairman.

The couple also established the Mulan Education Foundation, a nonprofit dedicated to enhancing U.S.–China relations, which has awarded thousands of scholarships.

Through the HBS gift, her father plans to continue the legacy of his wife of six decades, who died of lymphoma in 2007, Elaine Chao said.

“Her spirit of altruism, generosity toward others, and contributing to society are values that he hopes that the best university in the world will instill in the smartest students in the world,” Chao said, “so that our world will have better leaders of principle, conscience, and service to society.”