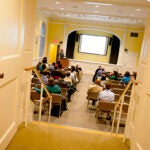 A plan to stop cholera’s spread

Aspirin therapy can extend the life of colorectal cancer patients whose tumors carry a mutation in a key gene, but it has no effect on patients who lack the mutation, Harvard-affiliated Dana-Farber Cancer Institute scientists report in the Oct. 25 issue of the New England Journal of Medicine.

In a study involving more than 900 patients with colorectal cancer, the researchers found that, for patients whose tumors harbored a mutation in the gene PIK3CA, aspirin use produced a sharp jump in survival: five years after diagnosis, 97 percent of those taking aspirin were still alive, compared with 74 percent of those not using aspirin. By contrast, aspirin had no impact on five-year survival rates among patients without a PIK3CA mutation.

“Our results suggest that aspirin can be particularly effective in prolonging survival among patients whose colorectal cancer tests positive for a mutation in PIK3CA,” said the study’s senior author, Shuji Ogino of Dana-Farber, Brigham and Women’s Hospital, and the Harvard School of Public Health (HSPH). “For the first time, we have a genetic marker that can help doctors determine which colorectal cancers are likely to respond to a particular therapy.” He cautions that the results need to be replicated by other researchers before they can be considered definitive.

While aspirin is often prescribed for colorectal cancer patients, doctors haven’t been able to predict which patients will actually benefit from the treatment. The new finding suggests that the survival benefit is limited to the 20 percent whose tumors have the PIK3CA mutation.

For the remaining patients, aspirin may still be used, but it is likely to be much less effective and can sometimes lead to gastrointestinal ulcers and stomach bleeding.

The study was prompted by previous research that suggested that aspirin blocks an enzyme called PTGS2 (cyclooxygenase-2), causing a slowdown in the signaling activity of another enzyme, PI3K. That led researchers to hypothesize that aspirin could be especially effective against colorectal cancers in which the PIK3CA gene is mutated.

To conduct the study, investigators obtained data on 964 patients with rectal or colon cancer from the Nurses’ Health Study and the Health Professionals Follow-Up Study — long-term tracking studies of the health of tens of thousands of people. The data included information on the patients’ use of aspirin after diagnosis and the presence or absence of PIK3CA mutations in their tumor tissue.

The study, which combines research into disease-related genes and large populations of individuals, represents a new, hybrid field that Ogino has termed “molecular pathological epidemiology.” “The field may help us bring together information from two frontiers of cancer research — at both the molecular and population levels — in ways that are beneficial to patients,” said Ogino, who is an associate professor in the Department of Epidemiology at HSPH.

The study was supported in part by grants from the National Institutes of Health, the Bennett Family Fund for Targeted Therapies Research, the Entertainment Industry Foundation through the National Colorectal Cancer Research Alliance, the Frank Knox Memorial Fellowship at Harvard University, and a Damon Runyon Clinical Investigator Award.

The lead author of the study is HMS research fellow in medicine  Xiaoyun Liao of Dana-Farber.