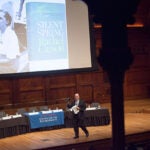 SEAS, at work on ambitious goals, pauses to celebrate its history

In all the history of applied science, 50 years is not much. After all, Imhotep — reputed to be the world’s first engineer — designed a pyramid more than 47 centuries ago.

But in one corner of Harvard University this month, 50 years is a mark that has great meaning.

On Oct. 1, the Harvard School of Engineering and Applied Sciences (SEAS) celebrated the 50th anniversary of ABET accreditation for its Scientiæ Baccalaureus (S.B.) degree in engineering sciences. ABET stands for Accreditation Board for Engineering and Technology, and its imprimatur is required as a first step toward a license for becoming a professional engineer.

This accredited degree was the only S.B. offered at Harvard for nearly all of the past 50 years. But in May, the Faculty of Arts and Sciences voted to make electrical engineering and mechanical engineering stand-alone concentrations starting this semester. Both will now earn concentrators the S.B. degree, which — as always — requires an undergraduate thesis.

ABET accreditation for these two new degrees may come sooner than the four- to five-year waiting period normally required. But at any rate, such accreditation is retroactive.

The new S.B. concentrations are part of a trend at SEAS to broaden opportunities within engineering programs — and to integrate liberal arts more fully with the sciences. In 2010, Harvard College launched a new concentration — biomedical engineering (B.M.E.) — that integrates engineering and life sciences. It will lead to a traditional A.B. (Artium Baccalaureus) degree.

That makes two new S.B. degrees at Harvard, and one that has been accredited now for 50 years. But engineering study goes much further back in University history — to 1847 and the founding of the Lawrence Scientific School. Science, of a sort, had been part of the Harvard College curriculum for two centuries earlier — astronomy, in particular. But Lawrence Scientific was Harvard’s first effort at providing advanced education in applied science. Celebrated Swiss naturalist Louis Agassiz was one of the first hires, and taught zoology and geology.

But there was institutional prejudice in the 19th century against adding the sciences to a liberal arts education. So Lawrence Scientific struggled, and twice was close to joining the Massachusetts Institute of Technology. But Agassiz protégé Nathaniel Shaler, who was dean of Lawrence Scientific starting in 1891, worked hard to right the Harvard science ship, and by 1902 enrollment was at an all-time high. In 1906, Lawrence Scientific dissolved and in part became the Graduate School of Applied Science — the first iteration of SEAS.

But in all those years, before and after 1906, engineering study remained the same in principle: the intersection of scientific precision with the forces of the real world. Agassiz traveled the globe to collect specimens and study glaciers. There are photographs of Shaler, sleeves rolled up, collecting rocks in remote corners of New England. And one 1902 photograph shows a group of rugged-looking students at a Harvard engineering camp at Squam Lake, N.H. Two are smoking pipes; one is holding an ax.

Over the years, students and faculty continued to devise creative solutions to the problems of their day. And what students they were. Among them: William James, the philosopher and pioneering psychologist who once collected Amazon River fish for Agassiz; Norman Mailer, who studied aeronautical engineering at Harvard; and Bill Gates, along with Microsoft partner Steven A. Ballmer.

Consider too these sample inventions from Harvard engineering programs: baking powder (1859); the crystal oscillator (1919), which held radio frequencies fixed and which made multiple phone calls possible over a single line; the largest cyclotron in the world (1938); one of the first electromechanical computers (1944); and one of the first attempts at a virtual reality device (1966).

Add this: Harvard’s Lene Hau and her team brought a beam of light to a complete stop, then started it up again.

Their mission that afternoon: to use a series of these probes to test the water for traces of iron, calcium, sodium, and other elements, additives, and contaminants.

“It doesn’t get any more real than this,” said Anas Chalah, director of SEAS’s teaching labs, as he stood by to answer student questions. The same kind of work — with clean beakers, probes, meters, and recording charts — is what engineers do to test water quality every day, all over the world. “You cannot teach environmental engineering,” Chalah said, “without hands-on experience.”

In a university setting there are constraints on fieldwork, of course, and consequently, experiments are often designed to mimic real-world conditions. In the corridor outside the Pierce Hall lab, for instance, are two machines that simulate renewable energy — one from the sun (with lamps) and the other from wind (with fans).

Of course, such machines can’t measure real energy efficiencies: They use power to create power. “We are clear about our limits,” said Chalah, imparting yet another engineering lesson. “But at the end of the day, students get the point.”