A welcome to the military 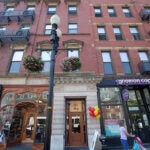 In the swing of things

Harvard President Drew Faust faced a tough crowd at the Faculty Club yesterday — tough as in “Don’t mess with these people.”

In the crowd of 100 was at least one Navy Seal, one Air Force-enlisted man who helped to steer drones to targets, and row after row of Army, Navy, and Marine Corps veterans of the wars in Iraq and Afghanistan. There also was a scattering of veterans from other countries, including Great Britain and Australia.

“I hope your presence on campus will lead to a greater understanding of what it means to be a soldier and a scholar,” said Faust, whose own family has seen four generations of military service.

A historian of the Civil War, she alluded to Harvard’s military and militia past, which extends all the way back to the early frontier wars of the 17th century. Faust also mentioned two reminders of that early military past that she experiences daily. Her residence (Elmwood) and her office (in Massachusetts Hall) were both used as hospitals during the Revolutionary War.

At Harvard, reminders of a martial past are everywhere. The Faculty Club is across the street from where breastworks were erected to stave off a British attack in 1775. (The assault never came.) It is a fast walk from University Hall, where muskets for student drill clubs were stored during the War of 1812. And it’s close to Boylston Hall, where Harvard’s first Union volunteers lined up for service in the Civil War.

The Faculty Club is also just across the street from Loeb House, where during World War II new candidate officers earned $50 a month in the V-12 Navy College Training Program. Loeb House was the venue yesterday for a barbeque dinner after the event.

Faust praised the veterans for their service and noted the new presence this fall of Reserve Officers’ Training Corps classes on campus — the first in 41 years. “We will continue to cultivate a campus environment,” she said, “in which military service is regarded as public service.”

HKS Dean David Ellwood introduced an afternoon panel by praising the military as a font of leadership skills. “We are very, very hungry for enlightened public leadership,” he said of the country at large. “Leaders are chosen as if people’s lives depended on them — and of course, they do.”

Harvard is a collage of students from other countries, more than 90 at HKS alone, and many students have never met or talked to a member of the military services, said Ellwood. “This is another chance for you to lead.” He echoed Faust’s suggestion to those assembled to “share your stories.”

Panel moderator Meghan L. O’Sullivan, though not a veteran, spent two of the past eight years in Iraq. She was deputy national security adviser in the administration of President George W. Bush, and is now the Jeane Kirkpatrick Professor of the Practice of International Affairs at HKS.

Panelist Harry R. Lewis, the Gordon McKay Professor of Computer Science, is not  strictly speaking a veteran either. But he was in the U.S. Public Health Service Commissioned Corps, a uniformed branch of service. “Most of Harvard is a very open place,” the former dean of Harvard College told the newcomers. “You should walk around.”

Tad Oelstrom, director of the National Security Program at HKS and a 35-year Air Force veteran who retired as a lieutenant general, shifted from praise to practicality. Be exemplars of military values, he said, including honesty, character, service, and moral behavior. “The Harvard community of veterans needs to be more than folks who touch base as students.”

Oelstrom also advised veterans to reach out, especially to those from countries where the military “only represents fear.” Having veterans and military service members on campus “is really important to Harvard.”

Navy Capt. Steven M. Benke, the only uniformed panelist and a visiting professor of naval science at the Massachusetts Institute of Technology (MIT), commands the NROTC’s MIT-based Old Ironsides Battalion, which has 150 students from the Boston area, 15 of them at Harvard. (The total ROTC enrollment at Harvard is 29.) Mentor these young officer candidates, he suggested: “Share your experiences, good and bad.”

That struck a chord with panelist Peter Brooks, a 2006 Harvard College graduate and a two-tour Marine veteran of Iraq. “The debate [over ROTC] was raging when I was here,” he said, and that made him, as a young midshipman, hungry for advice. “When I was an undergraduate,” he said, “I would basically chase down anyone with a short haircut and a military T-shirt.”

Brooks is now an M.B.A.-M.P.P. joint degree candidate at Harvard Business School (HBS) and at HKS. His advice is to find other veterans. “School can be a lonely place, especially after being part of a unit,” he said. “We need to take care of each other.”

Panelist Linda J. Bilmes, the Daniel Patrick Moynihan Senior Lecturer in Public Policy at HKS, is one of the foremost authorities on the cost of war. At work on a history of Walter Reed Army Medical Center, she is also pursuing research on women veterans and the transition from military to civilian life.

A military background gives you an experiential leg up on attractive research projects, said Bilmes, and Harvard is a rich opportunity to learn how to employ data better. Meanwhile, she said, “You are ambassadors of the military here.”

There will be times when talking to students with different views is challenging, said Bilmes, who advocated cultivating nonmilitary friends. “There’s a wonderful thing that helps you do this. It’s spelled b-e-e-r.” Everyone applauded.