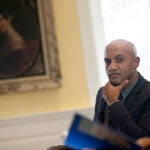 Bain brings his dynamic style to a new Harvard class

Some students were seasoned veterans. Some were novices, with jitters. Some had committed their work to memory; others had jotted their thoughts on paper that trembled slightly in their hands. In a sign of the times, many read their compositions from their phones.

Undergraduates gathered at Farkas Hall last week to audition for a workshop that taps into the power and poetry of language. Harvard’s new dramatic arts offering “Hip Hop and Spoken Word: Theater Performance Laboratory” is being taught by visiting lecturer Bryonn Bain, an activist, rapper, poet, and musician.

Bain is no stranger to campus, having graduated from Harvard Law School (HLS) in 2001. He’s also no stranger to using spoken word to make a point. In 1999, he was arrested and briefly detained for a crime he didn’t commit, an experience he drew heavily on to create “Lyrics from Lockdown.”

Taking to the stage first, Bain performed an excerpt from the show, a rush of song, poetry, and prose. Several of his collaborators also took turns — singing, rapping, or delivering searing and soul-searching poetry.

Although he has HLS on his resume, Bain never intended to practice law. He went to law school, he said, “to understand power, and to figure out how to get access to it, how to utilize it, and how to move social justice forward.”

After graduation he poured his energy into hip-hop and spoken-word performances, lecturing, and causes related to the nation’s prisons. He has brought his message and his one-man show to high schools, colleges, and correctional facilities.

Back on Harvard’s campus he hopes to bridge the disconnect between the work coming out of the nation’s poetry slams and its rich hip-hop movement and what many consider the “academic, armchair, tweed-jacket-with-the-pipe poets.”

Like Shakespeare, who created his verse in the language of the time, “hip-hop and spoken word is the voice of the next generation,” said Bain. “It’s important to create a space to nurture those voices and to give them an opportunity to talk about the issues that matter to them in a language that resonates with them.”

The course, he added, offers students the chance to “think about the history and the politics and the culture of the art form while learning how to write and perform their own work.”

Artists from poet Nikki Giovanni to pop princess Nicki Minaj, as well as texts from the Harlem Renaissance and the black arts movement, will feature prominently in the class, as students “workshop verse for the page and stage.” But Bain also plans to draw on the students’ interests to shape the curriculum.

The first class assignment — 10 questions requiring nothing more than a little introspection — is an attempt to connect with their psyches and playlists.  “What is the soundtrack to your life?” read one. Another asked,  “How would you spend the perfect day?” Bain also wanted to know whom the students would correspond with if there were only “three envelopes and stamps left on the planet.”

“My approach to pedagogy is to not design anything without a sense of who is in the class,” said Bain. “Who you teach is just as important as what you teach and how you teach.”

He hopes the class will also help students think more deeply about the nation’s penal system, and get them accustomed to being in the spotlight. The course work will likely include a visit to a prison, and a midterm exam consisting of a performance on a subway platform.

Sophomore Jalem Towler auditioned for the class with a work titled “Take Me Away,” about a teen growing up in a dangerous neighborhood. Towler, who wrote rap and poetry in high school, said he is eager to study something he loves.

“I am excited about this class,” he said, “mostly because I finally get to take a class that specializes in my passion.”