Venice and the built world 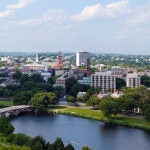 The “who’s who” of architecture convened in Venice late last month for a series of exhibits, lectures, events, and discussions to help kick off the Venice Biennale, a three-month contemporary architecture festival. Several Harvard faculty members made the trip, including Harvard Graduate School of Design (GSD) Dean Mohsen Mostafavi, who played a prominent role at the session.

“The Venice Biennale provides an important opportunity for the architecture and design community to share and debate innovative ideas from across the world,” said Mostafavi. “As leaders in practice as well as teaching, an impressive number of GSD faculty were involved in the extraordinary installations, projects, and discussions that addressed the exhibition theme of ‘Common Ground.’ ”

At the three-day opening of the world’s largest international architecture exhibition, Mostafavi helped to host the official reception for the United States Pavilion at the Peggy Guggenheim Collection in collaboration with the Graham Foundation for Advanced Studies in the Fine Arts, a leading supporter of architecture and its role in the arts, culture, and society. The theme for the pavilion, which is open through Nov. 25, is “Spontaneous Interventions: Design Actions for the Common Good.” It is based on a nascent movement by architects, designers, urban planners, and others who take the initiative to solve problematic urban concerns.

During the reception, Mostafavi unveiled one of the GSD’s newest publications, “Instigations: Engaging Architecture, Landscape, and the City,” a work developed by GSD and Lars Müller Publishers. An exhibit last year at the School in honor of its 75th anniversary inspired the new book, which examines the GSD’s rich history, as well as its current and future lines of teaching and research.

“This work will be read as something of a pedagogical manifesto and an authoritative history of the School, at least until the 100th anniversary in 25 years,” said Peter Christensen, M.Des.S. ’09, A.M. ’11, a Ph.D. candidate who worked on the exhibit and co-edited the book with Mostafavi.

The chance to unveil the work at “the most important venue for the pure exploration of contemporary architectural ideas,” Christensen said, helped to reaffirm the School’s global scope and its reputation as a place devoted to the creation, testing, and execution of ideas.

“It’s something, I think, the book attests to.”

“This volume’s presentation of the School’s current preoccupations and future directions, as well as its storied past, resonated with the exhibition’s call for an expanded role for architecture in civil society,” said Mostafavi.

As part of his official duties, Mostafavi curated an exhibition at the Venice Pavilion sponsored by Louis Vuitton and titled “Nicholas Hawksmoor: Methodical Imaginings,” for which he commissioned works by architectural photographer Hélène Binet. The show helped to document Hawksmoor’s contributions to British and European architectural culture in the early part of the 18th century. Mostafavi also participated in the panel discussion “Spontaneous Urbanisms” that explored the “state of the city and some of the motivating factors for the wave of citizen-led actions to improve the public realm.”

Dan D’Oca, a lecturer in urban planning and design at GDS, was in Venice with his firm, Interboro Partners, a New York-based office of architects, urban designers, and planners that was commissioned to create an installation for the courtyard in the American Pavilion.

“We wanted to make a space that was comfortable for people touring the exhibition who wanted to rest and hang out, but also a space that worked for different kinds of events,” like workshops, lectures, and panel discussions, said D’Oca.” Their finished design was a functional and recyclable “outdoor living room.”

D’Oca and his team borrowed the foundations of the temporary raised walkways that are erected during Venice’s high-water season to create the base of an elevated stage in the pavilion courtyard. They covered the stage with wooden planks and filled it with red foam cubes. Once the exhibition is over, the group will donate the planks to the city. The cubes will become part of Venice schoolyards and playgrounds.

D’Oca called the biennale “a great collection of like-minded people” who “feel very passionately that architecture can play an important role in making cities more just, and more vibrant.”