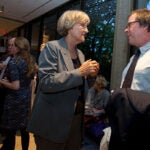 Happily, the Harvard Divinity School (HDS) community will receive some welcome help exploring Morrison’s work in the coming weeks. Carrasco, who acknowledged that “those of us who have spent time reading Morrison know how tough it is,” offered the Oprah anecdote last week during the first in a series of talks aimed at helping the HDS community delve into the religious dimensions of Morrison’s writing.

The working group, led by Carrasco and Stephanie Paulsell, Houghton Professor of the Practice of Ministry Studies, will convene on Fridays in the lead-up to the author’s Ingersoll Lecture on Immortality on Dec. 6 in Sanders Theatre.

During the discussion in Andover Hall’s Sperry Room, Carrasco described how he and Morrison, a longtime friend, had identified over several conversations three distinct ways that she portrays the sacred in her work: through traditional Christian rituals, sermons, and symbols; through African-influenced themes and characters; and through what Morrison called “just strange stuff.”

But a richer understanding of the religious themes and questions in her writing, said Carrasco, requires a deeper and more nuanced investigation. “We need multiple views, different disciplines, unusual takes, and conversations so that we can move forward in our understanding,” he said.

Those conversations will take shape during the next three months in collaboration with scholars from HDS and across the University, including historian Walter Johnson, Winthrop Professor of History and professor of African and African-American studies, whose most recent book is “Soul by Soul: Life Inside the Antebellum Slave Market,” and Jonathan L. Walton, the new Pusey Minister in the Memorial Church and Plummer Professor of Christian Morals. They will explore Morrison’s 1992 essay collection “Playing in the Dark: Whiteness and the Literary Imagination.”

Morrison’s interest in storytelling began in her youth, Carrasco said. As a child, the Ohio native and avid reader grew up on ghost stories. She eventually studied English at Howard University. She attended Cornell University, where she earned a master of arts degree in English in 1955, and wrote a thesis on the theme of suicide in the writings of Virginia Woolf and William Faulkner. Eventually, she turned to a career in publishing. It was in publishing, the author said at Radcliffe Yard in 2007, that “I finally followed the books to writing them.”

Themes of cultural identity, freedom, and loss figure prominently in her writing. Among her best-known works are her novels “The Bluest Eye,” about a young African-American girl’s desire for white skin and blue eyes; “Sula,” a tale of friendship and betrayal; and “Beloved,” based on the story of an African-American slave who briefly escaped to freedom in Ohio. Morrison won the Nobel Prize in literature in 1993. In May, she received the Presidential Medal of Freedom.

As part of his opening talk, Carrasco examined the religious dimensions to Morrison’s 1977 novel “Song of Solomon,” about an African-American man who sets out on a quest to discover the truth about his family history and the story of a relative who escaped slavery by flying back to Africa.

In the book, said Carrasco, Morrison develops the notion of “the importance and power of magical flight as a way to help the characters deal with “profound racial suffering.”

“In my view,” added Carrasco, “Morrison has partially hidden in her narrative thread of magical flight the key religious theme of finding a spiritual ally who enables the seeker to transcend the terror of one’s historical condition.”