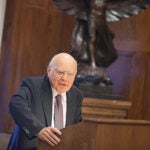 When a family lives in times of turmoil, what do you tell the children? Do you shield a 9-year-old from Moammar Gadhafi’s Libya? Adolf Hitler’s Germany? How much do you tell them about slavery? Apartheid? The Holocaust?

Fourth-grade teacher Madeleine Keller faces such questions daily in the classroom. In August, she was able to reflect on those issues more fully, thanks to an unusual online book club of webinars organized by five of Harvard’s international study centers.

“I think of these webinars as professional development of the highest quality,” said Keller, who has been teaching for 23 years at the Bryn Mawr School in Baltimore. “They help me further my understanding of cultures different from my own and make me think about current events, history, and geography from a much stronger background of knowledge.”

The Global Literature Online Book Group for Educators kicked off in August with a discussion of “In the Country of Men,” by Hisham Matar. The novel tracks the life of a 9-year-old boy in Gadhafi’s Libya, highlighting life under the repressive regime through the boy’s involvement with the social and political world around him.

The series will run through the academic year, with the next book, “Sweetness in the Belly,” about the daughter of Muslim converts living between Ethiopia and London, set for October.

Using webinar software from the Center for Middle Eastern Studies, each center takes a turn presenting a book of its own choosing. The first session was offered by CMES itself. “Sweetness in the Belly” will come from the Prince Alwaleed Bin Talal Islamic Studies Program.

The book group was organized by Anna Mudd, outreach coordinator for CMES and the Davis Center, and Elise Noel, student programs and outreach officer for the Committee on African Studies, along with Cris Martin, Krystina Friedlander, and Erin Goodman. Noel said she and representatives of the other regional centers got together last spring to talk about working together on outreach. Noel said she brought up the idea of a physical book club, which evolved into an online one.

Having several regional centers involved, Noel said, will make the series more attractive to teachers because, although they may talk about international topics in class, they rarely focus on just one region. The discussions were moved online, in part, to make it more convenient for those who have other commitments — like small children at home after school — and to appeal to more teachers from outside the Boston area.

“It just explodes the number of teachers we can reach, nationally and internationally,” Mudd said.

The series offers professional development points for teachers who complete all five sessions. The last three are scheduled for December, May, and June, and will involve tales from the Dominican Republic, Russia, and Nigeria.

In talking about a book club, Mudd said the CMES webinar software seemed a natural fit. The center has hosted similar events using the tool, which allows two-way communication through audio and video and also has a chat window for those working on computers that lack cameras or microphones.

The sessions are designed to be discussions rather than lectures from “on high,” Mudd said. Teachers participating — some 80 have signed up for at least one session — read the books beforehand and then log on to hear a brief presentation by a scholar, followed by discussion.

“They were such robust conversations” in the first session, Mudd said. “Sometimes I think the best thing we can do is just provide a space for teachers to talk to each other.”

The conversations involved not only the book but also the ways to teach the material to students. That conversation, Mudd said, can be useful to professors presenting the book, as well as to classroom teachers.

The book group is a useful link for people trying to foster understanding of regions outside the United States, Mudd said. For places like the Middle East — so often viewed solely through the lenses of politics and religion — the book group can provide a humanizing view of life there.

For teachers such as Keller, the book group provides a guided tour through global literature. Keller said that without the group she wouldn’t have known about “In the Country of Men,” a book she enjoyed and recommended to a friend. Keller said the online presentation allows her to interact both with top scholars and with fellow teachers. In addition, she said, the exposure to the webinar technology is helpful in this technology-enabled age.

“I would not have this opportunity without the webinars,” Keller said. “Hearing these accomplished people present their insights and hearing their questions and responses takes me to another level of scholarship and thought. They help me with my thinking or background knowledge and often stimulate me to explore more about a topic on my own.”