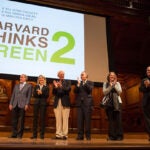 Harvard expert bemoans squandering of model for cap and trade

In 1990, Northeastern lakes were becoming more acidic, threatening fish and other aquatic life and conjuring images of a future where lakes — even those in remote wilderness — were barren.

The culprit was acid rain, generated by fossil fuel burning in automobiles and power plants that spewed sulfur dioxide into the atmosphere, where it became sulfuric acid, falling in rain and as dry particles into lakes and forests.

Today, the acid rain problem is greatly reduced. Bipartisan legislation passed in 1990 cut sulfur dioxide emissions over the next 17 years to half the level of 1980, reaching the legislated target three years ahead of schedule and providing health and environmental benefits estimated to outstrip costs by tens of billions of dollars.

The sulfur dioxide regulatory system was adopted as part of the Clean Air Act of 1990. In it, total sulfur dioxide emissions were capped — enforced by a $2,000 per ton fine for excess emissions — and then permits were given to power plants across the country to emit a certain amount. Financial incentives for power plant cleanup came by making the emission permits tradable. That meant a plant that lowered emissions below the limit could sell the right to emit more sulfur dioxide to a plant that was having trouble meeting its target. The result was a system that provided incentives for power plant operators to switch to cleaner fuels, install smokestack scrubbers to clean emissions, shut down aging plants, and take other steps to clean emissions beyond the legal requirement.

The program’s success made it a model of how a cap-and-trade regulatory scheme should work — everywhere but in the United States.

Harvard environmental economist Robert Stavins said last week that national politics have “tainted” cap and trade, making it unlikely the country will adopt such a scheme to fight climate change anytime soon, even though similar plans are being adopted by other nations around the world.

Stavins, the Pratt Professor of Business and Government at the Harvard Kennedy School (HKS), talked about lawmakers’ solution to acid rain Sept. 13 during a seminar held by the Kennedy School’s Regulatory Policy Program, led by Joseph Aldy, assistant professor of public policy.

“I think it is fair to say that it offered … a compelling demonstration of cap and trade and, more generally, of market-based interventions for environmental problems,” Stavins said.

Drawing on a working paper he authored with Massachusetts Institute of Technology Professor Richard Schmalensee, Stavins outlined the program’s success as well as four “ironies” — one of which is today’s conservative opposition to an idea that had wide support among Republicans.

“Conservatives have demonized their own policy innovation,” Stavins said.

Other ironies include that the government did the right thing — reduce sulfur dioxide emissions — for the wrong reason: to clean up the environment. Estimates of the program’s benefits put the price of health improvements from improved air quality far higher than benefits to lakes and forests.

Another irony was that unrelated government action — rail deregulation — helped ensure the success of this environmental policy. Deregulation lowered the cost of shipping lower-sulfur coal around the country, making a more environmentally friendly fuel cheaper. Stavins’ fourth point was that what the government gives, it can take away. Despite the program’s success, recent judicial decisions and regulatory changes have essentially brought it to an end.

Cap and trade was considered a possible way to lower U.S. carbon dioxide emissions to fight climate change until the 2009 battles in Congress, which saw legislation pass the House and then die in the Senate. Republican opponents focused on a key difference between the 1990 and 2009 plans. In the cap and trade proposed for carbon dioxide, rather than giving away emission permits to get the system started, the law would have auctioned them off to emitters. This caused Republicans — some of whom doubt climate change science anyway — to fight against it as a tax.

Objections based on fact or approach could have been negotiated, Stavins said. But instead of seeking explanation or compromise, the opposition mounted a campaign to demonize the legislation, labeling it “cap and tax” and in the process tarnishing the whole approach, he said.

The political demise of a cap-and-trade system leaves a straight-out carbon tax as an alternative, which Stavins said has even less chance of passage.

“If it is easy to demonize cap and trade as a tax, it’s a lot easier to demonize a tax as a tax,” Stavins said. “That probably means, given the political challenges of a carbon tax, the outlook for national policy is not good.”