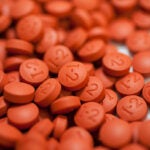 Melanoma is the most dangerous type of skin cancer and is the leading cause of death from skin disease. Rates are steadily increasing, and although risk increases with age, melanoma is now frequently seen in young people.

But what if we could pinpoint when seemingly innocuous skin pigment cells mutate into melanoma? Researchers at Harvard-affiliated Brigham and Women’s Hospital (BWH) have achieved this. Teams led by Harvard Medical School Assistant Professor of Medicine Yujiang Geno Shi, from BWH’s Department of Medicine, and George F. Murphy, from BWH’s Department of Pathology, have discovered a new biomarker for the lethal disease. The findings offer novel opportunities for skin cancer diagnostics, treatment, and prevention.

The study will be published on Sept. 14 in Cell.

“Dr. Shi and colleagues have discovered an exciting new connection between the loss of a specific chemical mark in the genome and the development of melanoma,” said Anthony Carter, of the National Institutes of Health’s National Institute of General Medical Sciences, which mainly funded the research. “This work is a prime example of how basic research on mechanisms of epigenetic regulation can yield clinically significant insights that hold great promise for diagnosing and treating cancer.”

The researchers found that certain biochemical elements in the DNA of normal pigment-producing skin cells and benign mole cells are absent in melanoma cells. Loss of these methyl groups — known as 5-hmC — in skin cells serves as a key indicator for malignant melanoma. Loss corresponded to more-advanced stages of melanoma as well as clinical outcome.

Strikingly, researchers were able to reverse melanoma growth in preclinical studies. When the researchers introduced enzymes responsible for 5-hmC formation to melanoma cells lacking the biochemical element, they saw that the cells stopped growing.

“It is difficult to repair the mutations in the actual DNA sequence that are believed to cause cancer,” said Christine Lian, a physician-scientist in the Department of Pathology at BWH and one of the lead authors. “So having discovered that we can reverse tumor cell growth by potentially repairing a biochemical defect that exists — not within the sequence but just outside of it on the DNA structure — provides a promising new melanoma treatment approach for the medical community to explore.”

Because cancer is traditionally regarded as a genetic disease involving permanent defects that directly affect the DNA sequence, this new finding of a potentially reversible abnormality that surrounds the DNA (thus termed “epigenetic”) is a hot topic in cancer research, according to the researchers.