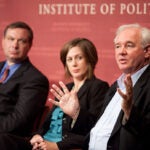 Scholars from across the nation gathered at Harvard on Friday to examine the persistent problems of race, poverty, and economic inequality in the United States. The conference was focused around the 25th anniversary of the publication of “The Truly Disadvantaged” by University Professor William Julius Wilson.

Through his writing and research, Wilson, director of the Joblessness and Urban Poverty Research Program at the Malcolm Wiener Center for Social Policy at Harvard Kennedy School (HKS), is credited with changing the national dialogue about the causes of and possible remedies for urban poverty in America.

“He [Wilson] not only made [poverty] a topic that was acceptable and indeed important to reflect on and think about and deal with, he actually put academic rigor and frames and substance around these issues with strong, compelling hypotheses and data,” said David T. Ellwood, HKS dean and conference panelist.

Conference topics ranged from social dislocation to the politics of inequality.

“I want to be able to communicate, not only to the people who are at this conference, but [to] those who hear about the conference, how important the issues of poverty and concentrated poverty are and to try to provide a comprehensive understanding of these conditions and how they’ve changed over time,” said Wilson.

When asked if the state of urban poverty had changed in the quarter century since his book was published, Wilson said it generally had not.

“Things are qualitatively similar to the way they were when I wrote ‘The Truly Disadvantaged,’ ” he said. “But there have been some changes, and one major change has been the impact of immigration in inner-city neighborhoods, including the revitalization of some of these neighborhoods.”

The first panel, “Deindustrialization and Joblessness,” set the tone for the conference with fresh data and new questions.

“Policy changes in the 1990s further pushed black men out,” said Barry Bluestone of Northeastern University, referring to the fact that the black male employment rate fell from 72 percent in 1970 to 54 percent in 2010. As of three years ago, according to census information, only one in four black males was working.

Conference participants discussed how the loss of manufacturing jobs has had a greater impact on the earnings of black men, and the panelists considered whether the concentration of poverty has changed since the publication of Wilson’s book.

The august gathering humbled Wilson, and the one time he had trouble finding his words was when he was asked how he felt about all the intellectual firepower assembled in recognition of his work. “It’s mind-boggling,” he said.