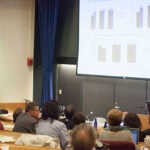 In birds’ development, researchers find diversity by the peck

It has long been known that diversity of form and function in birds’ specialized beaks is abundant. Charles Darwin famously studied the finches on the Galapagos Islands, tying the morphology (shape) of various species’ beaks to the types of seeds they ate. In 2010, a team of Harvard biologists and applied mathematicians showed that Darwin’s finches all actually shared the same developmental pathways, using the same gene products, controlling just size and curvature, to create 14 very different beaks.

Now, expanding that work to a less closely related group of birds, the Caribbean bullfinches, that same team at Harvard has uncovered something exciting: namely, that the molecular signals that produce those beak shapes show even more variation than is apparent on the surface. Not only can two very different beaks share the same developmental pathway, as in Darwin’s finches, but two very different developmental pathways can produce beaks of exactly the same shape.

“Most people assume that there’s this flow of information from genes for development to an inevitable morphology,” says principal investigator Arhat Abzhanov, associate professor of organismic and evolutionary biology (OEB). “Those beaks are very highly adaptive in their shapes and sizes, and extremely important for these birds. In Darwin’s finches, even one millimeter of difference in proportion or size can mean life or death during difficult times. But can we look at it from a bioengineering perspective and say that in order to generate the exact same morphological shape, you actually require the same developmental process to build it? Our latest research suggests not.”

The findings have been published in the Proceedings of the National Academy of Sciences.

The Caribbean bullfinches, geographic and genetic neighbors to Darwin’s finches, are a group of three similar-looking species that represent two different branches of the evolutionary tree. These bullfinches have very strong bills that are all exactly the same geometric shape but slightly different sizes.

“They specialize in seeds that no one else can touch,” explains Abzhanov. “You’d actually need a pair of pliers to crack these seeds yourself; it takes 300 to 400 Newtons of force, so that’s a really nice niche if you can do that. But the question is, what developmental changes must have occurred to produce a specialized beak like that?”

A new and highly rigorous genomic analysis by co-author Kevin J. Burns, a biologist at San Diego State University, has shown that among the three Caribbean bullfinch species, this crushing type of beak actually evolved twice, independently. Convergent evolution like this is common in nature, and very familiar to biologists. But understanding that phylogeny enabled Abzhanov, lead author Ricardo Mallarino (a former Ph.D. student in OEB at the Graduate School of Arts and Sciences), and colleagues in applied mathematics at the School of Engineering and Applied Sciences (SEAS) to perform a series of mathematical and morphogenetic studies showing that the birds form those identical beaks in completely different ways. Such studies must, by their nature, be performed early in the embryonic stage of the birds’ development, when the shape and tissue structure of the beak is determined by the interactions of various genes and proteins.

“In the small bullfinch you have almost a two-stage rocket system,” says Abzhanov. “Cartilage takes you halfway, and then bone kicks in and delivers the beak to the right shape. Without either stage, you’ll fail. In the larger bullfinches, the cartilage is not even employed, so it’s like a single-stage rocket, but it’s got this high-energy, synergistic interaction between two molecules that just takes the bone and drives its development straight to the right shape.”

In embryos of the small bullfinch, Loxigilla noctis, the control genes used are Bmp4 and CaM, followed by TGFβIIr, β-catenin, and Dkk3, the same combination used in Darwin’s finches. Embryos of the larger bullfinches, L. violacea and L. portoricensis, use a novel combination of just Bmp4 and Ihh.

“Importantly,” Abzhanov says, “despite the fact that these birds are using different systems, they end up with the same shape beak, and a different shape beak from Darwin’s finches. So that reveals a surprising amount of flexibility in both the shapes and the molecular interactions that support them.”

The finding offers new insight into the ways birds — the largest and most diverse group of land vertebrates — have managed to adaptively fill so many different ecological niches.

“It is possible that even if the beak shape doesn’t change over time, the program that builds it does,” explains Abzhanov. “For evolution, the main thing that matters for selection is what the beak actually looks like at the end, or specifically, what it can do. The multiple ways to build that beak can be continually changing, provided they deliver the same results. That flexibility by itself could be a good vehicle for eventually developing novel shapes, because the developmental program is not frozen.”

Following a standard process in studies of developmental biology, Abzhanov’s team began with measurements of the morphological differences between species, followed by observations of gene expression in bullfinch embryos and functional experiments using chicken embryos. Along the way, mathematical models helped the team to quantify and categorize the beak shapes they were seeing.

“We used geometric morphometric analysis, looking at these beaks as curves,” says co-author Michael Brenner, Glover Professor of Applied Mathematics and Applied Physics at SEAS and Harvard College Professor. “The beak shapes would turn into contours, contours were digitized into curvatures, and curvatures were turned into representative mathematical formulas. This provided our biology colleagues with an unbiased way of determining which of the different species had beak shapes that were identical up to scaling transformations, and which were in a completely different group.”

In order to observe gene expression in the developing bullfinch embryos, Mallarino and a team of undergraduate field assistants had to collect eggs from wild nests in the Dominican Republic, Barbados, and Puerto Rico. The birds breed in dome-shaped nests with small side entrances, often in the tops of tall cacti. In accordance with strict fieldwork regulations, Mallarino’s team collected only every third egg laid, which required them to return to the nests daily, climbing dozens of trees and cacti to carefully label every new egg. Laden with radios, notebooks, markers, heavy ladders, and a special foam crate for the delicate eggs, the team ventured into remote field sites at dawn and returned to camp before noon to incubate those they collected.

“It’s a big logistical operation,” he adds. “It’s five months of really, really hard work under the sun in crazy conditions, but when it works it’s really rewarding. At day six or seven you have a perfect, live embryo with a beak beginning to form, and you can learn so much about it.”

The next step in this work is to widen the lens yet again and compare the morphological development of a broader group of birds.

“In time, hopefully we’ll see how the great diversity that you see among all these highly adaptive bird beaks may actually evolve at the genetic level,” says Mallarino. “That’s the greater challenge.”

In addition to Abzhanov, Mallarino, and Brenner, co-authors included Otger Campàs, a former postdoctoral associate at SEAS; Joerg A. Fritz, a graduate student in applied mathematics at SEAS; and Olivia G. Weeks ’13.

This work was supported by several grants from the National Science Foundation, as well as the Kavli Institute for Bionano Science and Technology at Harvard and the National Institutes of Health.