On the streets of Allston 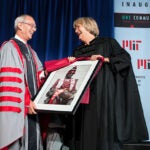 A president next door

On a perfect fall day, Harvard students, staff, and affiliates made their way across the Charles River to join members of the Greater Boston community in the ninth annual Brian Honan 5K Run/Walk. The race, which benefits the Brian J. Honan Charitable Fund, featured more than 1,500 participants, with 200 Harvard-affiliated runners sponsored by Harvard Public Affairs & Communications and the Harvard Business School. Nearly 400 Harvard runners participated.

State Rep. Kevin Honan, who represents Allston-Brighton, was on hand for the race celebrating the legacy of his brother, Brian. “There’s a huge Harvard participation in this race this year,” Honan said. “Harvard has really stepped up in terms of inviting their students to participate in the race, and we’re grateful for it. Brian grew up in Allston-Brighton, and he was actually the official scorekeeper of the Harvard men’s basketball team for many years. Even when he was a practicing attorney, he would still keep score for them. Today, Harvard has a strong presence in the Allston community, so we’re grateful that they help us out, and contribute to the charitable fund.”

“Participating in the Brian Honan 5K is just one of many ways Harvard supports Allston-Brighton,” said Christine Heenan, vice president of Harvard Public Affairs & Communications. It allows Harvard and the community to come together to support an important cause.”

Craig Rodgers, a counselor at Harvard’s Bureau of Study Counsel, has run the Honan 5K for six years. His annual participation is due to “the fact that so many people from our Harvard community run in this race every year. This morning, before the race, a group of us met at the Weld Boathouse and jogged over to Allston together. It’s something that’s very congruent with the concept of building community through running. It’s a chance for people to talk and get to know each other along the way, and it’s open to all members of the community.”

In addition, Rodgers mentioned that Harvard offers multiple running opportunities. “Between Harvard on the Move and Harvard College Marathon Challenge, there’s a lot of participation in community running,” Rodgers said. “It’s just a great way to enjoy the amazing weather and enhance our community.”

Connie Hsu ’16 and Kendall Crawford ’16 joined seniors Mackenzie Luick ’13 and Caroline Weaver ’13, all members of the Harvard women’s swimming and diving team, in warming up before the race. “The Honan 5K is a nice way to get away from the pool, participate in a community event, and see some of Boston,” said Weaver. “We try to do it every year.”