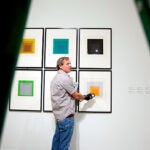 At 50, a building still dares

A tiger in love with its keeper and an unemployed man impersonating a doctor are among the many mesmerizing and mysterious characters that populate Rajesh Parameswaran’s first collection of short stories, titled “I Am an Executioner: Love Stories.”

The soft-spoken author kicked off this year’s Radcliffe Institute for Advanced Study’s series of fellow presentations Monday with a program that included readings from his well-received debut work that merges themes of love and death, as well as from his work in progress.

In his story “The Infamous Bengal Ming,” Parameswaran’s protagonist is a giant cat that has hopelessly fallen for his human captor “Kitch.” The animal describes its love to the reader with heart-wrenching depth before the tale veers in a darker direction.

“The pain in my head melted into some pink loving bliss. Where was my hunger?” read Parameswaran. “Where was all the gloom and trouble of the day? It was all gone. Kitch was here. I paced back and forth and meowed like a lovesick lynx.”

The New York Times said Parameswaran’s collection was marked by “a compulsive and infectious narrative restlessness.”

Parameswaran, Radcliffe’s Beatrice Shepherd Blane Fellow, is a graduate of Yale College and Yale Law School. He is using his Harvard year to delve into fresh literary territory: the novel. At Radcliffe, he will work on a book loosely inspired by an island off the coast of Brooklyn that was used for processing New York City’s garbage and dead horses in the 19th and early 20th centuries.

The author, who said he always loved reading and writing but came to his literary profession later in life, fielded questions from the audience, including queries about his inspirations and his writing style.

Like many writers, he keeps a notebook close at hand filled with lists of ideas. Often he works at length to expand one of those thoughts, he said, only to stash the result away in a drawer for weeks, months, or even years before returning to it.

When he revisits it later, “Suddenly it will become clear to me … sometimes you just need the distance.”

Herman Melville, Vladimir Nabokov, and Edgar Allen Poe are among his favorite writers. Poe, who is best known for his dark gothic tales, was “full of love and violence,” said Parameswaran, who weaves both themes into his collection of stories.

He favors using first-person narrative because “speaking in somebody else’s voice is just fun,” and because the technique often allows the reader to see more than the narrator, resulting in “an interesting tension and dynamic.” Asked if any particular style of writing gives him trouble, Parameswaran responded, “A realistic story in which nobody dies — that’s usually defeated me.”

Most of his stories, he said, develop first from a character or a situation or a predicament rather than from a specific plotline. Often he isn’t sure exactly where a story will end up when he begins to write. “I am not an outliner. I just kind of see where things are going more intuitively.”