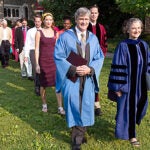 Lessons that lead toward peace

At Morning Prayers, Faust discusses the values that clarify

Morning Prayers have been a tradition at Harvard since the 17th century, when undergraduates were required to attend chapel services — and were admonished not to hiss, scrape their chairs, or bring umbrellas.

There were some umbrellas in Appleton Chapel on a rainy Tuesday morning, though no hissing or chair scraping. (Pews are hard to budge.) But there was edification, including music by the Choral Fellows of the Harvard University Choir and brief remarks by Harvard President Drew Faust. It was her sixth year delivering a message at the first such service of the academic year. In other years, the mornings “were clear and crystalline,” she said, “filled with light just beginning to slant with the promise of fall.”

“Here we are once more,” said Faust, who celebrated the promise of fall for what it has meant to her: “new teachers, new students, … the lure of new knowledge, new understanding — that rhythm of new beginnings, with its implicit assurance of annually and infinitely renewed wonder.”

But this academic year is special, she said, a time to welcome the arrival of the Rev. Jonathan L. Walton, the Pusey Minister in the Memorial Church as well as Plummer Professor of Christian Morals in the Faculty of Arts and Sciences and professor of religion and society at Harvard Divinity School. (Walton, whose appointment began in July, succeeds the Rev. Peter J. Gomes, who died last year.)

When Gomes was appointed nearly four decades ago, said Faust, “widespread scholarly and popular opinion anticipated the waning or even the disappearance of religion, as modernity advanced across the globe. And yet just the opposite has occurred.”

Faust reflected on how a secular university such as Harvard, “dedicated to the power of reason,” might learn from the realm of the spiritual. One key to the answer, said Faust, is a favorite quote of Walton’s by the late minister and educator Benjamin Elijah Mays, a son of former slaves: “The love of God and the love of humanity are indeed one.”

She said, “Mays unites the ineffable with the immediate. The self is suspended between the infinite and the community of mankind.” And in that suspension between two worlds, said Faust, there is a need “to recognize and serve both.”

Some people at Harvard may not use the word “God,” she said, but all recognize that “our best moments come … when we stretch beyond the immediate and instrumental, and beyond all our very talented and dedicated selves — when we ask questions about larger purposes.”

“Mays asks us to look up and to look across,” she said. “Universities urge us to do the same.”

In looking up, said Faust, people are able to “explore mysteries, to ask questions without answers, to think — not just about tomorrow — but about generations and ages hence, to recognize the humility of not knowing as the beginning of wisdom.”

In looking across, she said, people can “be part of this extraordinary community in which we are all teachers and learners — and connect the work of that beginning to the wider world, in which knowledge can serve as a powerful force for human benefit.”

In the bright, solemn chapel, Faust made a wish for the coming academic year: that Walton’s sentiment of love that unites the known and the unknown would work its magic.

“May Jon inspire us,” said Faust, “to reach beyond our individual talents, ambitions, and achievements, to be at once wondering and humble in the face of mystery, and open and generous in a community of belonging that will strengthen us all.”