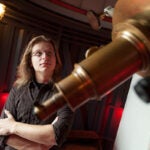 Harvard researchers create a light wave that propagates without spreading

A Harvard-led team of researchers has demonstrated a new type of light beam that propagates without spreading outward, remaining very narrow and controlled along an unprecedented distance. This “needle beam,” as the team calls it, could greatly reduce signal loss for on-chip optical systems and may eventually assist the development of a more powerful class of microprocessors.

Based at the Harvard School of Engineering and Applied Sciences (SEAS) and the Laboratoire Interdisciplinaire Carnot de Bourgogne, at the National Center for Scientific Research (CNRS), in France, the applied physicists both characterized and created the needle beam. Their findings were published online Aug. 31 in the journal Physical Review Letters.

The needle beam arises from a special class of quasiparticles called surface plasmons, which travel in tight confinement with a metal surface. The metallic stripes that carry these surface plasmons have the potential to replace standard copper electrical interconnects in microprocessors, enabling ultrafast on-chip communications.

One of the fundamental problems that has so far hindered the development of such optical interconnects is the fact that all waves naturally spread laterally during propagation, a phenomenon known as diffraction. Diffraction reduces the portion of the signal that can actually be detected.

“We have made a major step toward solving this problem by discovering and experimentally confirming the existence of a previously overlooked solution of Maxwell’s equations that govern all light phenomena,” says principal investigator Federico Capasso, Robert L. Wallace Professor of Applied Physics and Vinton Hayes Senior Research Fellow in Electrical Engineering at SEAS. “The solution is a highly localized surface plasmon wave that propagates for a long distance, approximately 80 microns in our experiments, in a straight line without any diffraction.”

The needle beam, technically a cosine-Gauss plasmon beam, propagates in tight confinement with a nanostructured metal surface. Lead author Jiao Lin, a visiting postdoctoral fellow at SEAS from the Singapore Institute of Manufacturing and Technology, and co-author Patrice Genevet, a research associate in Capasso’s group, found an ingenious way to demonstrate the theorized phenomenon. They sculpted two sets of grooves into a gold film that was plated onto the surface of a glass sheet. These tiny grooves intersect at an angle to form a metallic grating. When illuminated by a laser, the device launches two tilted, plane surface waves that interfere constructively to create the nondiffracting beam.

“Our French colleagues did a beautiful experiment, using an ultra-high-resolution microscope to image the needle-shaped beam propagating for a long distance across the gold surface,” says Genevet.

Capasso’s team hopes the finding will assist the development of more energy-efficient and powerful microprocessors.