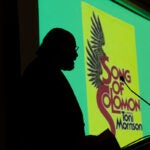 Roberto Mighty wants Fisher Museum visitors to leave his art exhibit on Sunday with a reverence for the central Massachusetts landscape and a few modern lessons based on how Puritans and Native Americans viewed the land 400 years ago. The exhibit, “First Contact,” focuses on the period roughly from first Colonial contact to the generation before King Philip’s War, from 1600 to 1650.

The exhibit is the culmination of Mighty’s yearlong artist residency at the Harvard Forest in Petersham, Mass., supported by a grant from the National Science Foundation’s Long-Term Ecological Research Program. Over the course of a year, Mighty has used several types of cameras and recorders to gather high-definition video, high-resolution photographs (including tree canopy and underwater images), and surround-sound audio throughout the forest. “First Contact: Puritans, Native Americans, and the Clash over Land in 1630” combines those elements with historical text, music, and professional voice-overs to portray how religion and economics led to land use clashes between Puritans and Native Americans.

A tremendous amount of research underpins his work. “ ‘First Contact’ has occupied my thoughts every day and night for close to 18 months,” says Mighty, who lived on the Alaskan frontier as a boy and now teaches visual and media arts at Emerson College and Boston University. “It was exciting to spend months reading the letters, sermons, books, and court records of the early English Colonial settlers.”

To construct the voice-overs of historical text for the exhibit, Mighty recruited top British specialists in original pronunciation of Elizabethan English. “Besides providing outstanding voice-overs, they gave me cultural context that I couldn’t readily get from the history books,” he says.

The Native American perspective was also not easily found in books, so Mighty consulted with a linguist and cultural specialist from the Nipmuc Nation. “I was surprised at how deeply I was touched by the history,” said Mighty. “I sometimes found myself crying as I worked my way through the historical accounts. In the very beginning, the Puritans and the Native Americans tried to coexist. But gradually, it became obvious that one group would have to go. Most people can see the sadness in this. As an Afro-Latin descendant of former slaves, I found it particularly resonant.”

David Foster, director of the Harvard Forest, describes the exhibit as “a truly engaging work of scholarship and art that conveys a deep understanding of our landscape and its history while also motivating a desire to care and conserve it for the future.”

Mighty hopes visitors will find modern relevance in the exhibit. “Issues of land use, ethnic cleansing, and theocracy continue to affect our world today,” he said. “The land use piece is particularly important in Massachusetts, where we need to be thoughtful about managing our wild lands while also providing for economic development. We can take many important lessons from the people who came before us.”

The exhibit’s public opening event will take place on Sunday from 2 to 5 p.m. in the Fisher Museum at 324 North Main St. in Petersham, Mass. The event will include a one-time film screening, an artist presentation, and a light reception catered by the Millers River Cafe. A continuing exhibition of a seven-minute film and fine art photography will remain in the Fisher Museum through the month of October. The Fisher Museum is open Monday to Friday from 9 a.m. to 4 p.m. and on weekends from noon to 4 p.m. Learn more about the exhibit, watch the film trailer, and read a full interview with the artist.