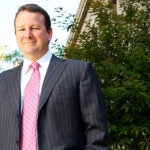 Jessica Tuchman Mathews and Theodore V. Wells Jr. have been elected to become the newest members of the President and Fellows of Harvard College (the Harvard Corporation), the University announced today.

Mathews, an alumna and past trustee of Radcliffe College, has served for the past fifteen years as president of the Carnegie Endowment for International Peace, the oldest international affairs think tank in the United States.

Wells, a graduate of Harvard Law School and Harvard Business School and one of the nation’s leading trial lawyers, has served since 2000 as co-chair of the litigation department at the New York-based firm Paul, Weiss, Rifkind, Wharton & Garrison LLP.

In accordance with Harvard’s charter, Mathews and Wells were elected today by the Corporation with the consent of the Board of Overseers, and will become Fellows of Harvard College as of Jan. 1, 2013.  They are the fifth and sixth new members named to the Corporation since the governing boards approved a plan in December 2010 to expand the Corporation from seven to thirteen members over the course of several years.

In a message to the University community, Robert D. Reischauer, senior fellow of the Corporation, and President Drew Faust said:  “We are very pleased to welcome these two distinguished alumni to the Corporation, both of whom will expand our capacity and contribute important and distinctive perspectives to our work.  Jessica Mathews is a widely admired figure in the international affairs domain, with a career that has combined excellence in nonprofit leadership with experience in government, policy, science, environmental affairs, and journalism.  Ted Wells is an extraordinarily accomplished lawyer renowned for his wise counsel, his powers of analysis and persuasion, and his devotion to education and the public interest.  Harvard will be fortunate to have the benefit of their service.”

Mathews has served since 1997 as president of the Carnegie Endowment for International Peace, founded in 1910 and dedicated to advancing cooperation among nations and promoting active international engagement by the United States.  An influential figure in international policy circles, Mathews is credited with having led the Endowment with distinction for the past fifteen years, shaping the first genuinely global think tank during an era of rising internationalization.  Recently the Endowment has created an expanding global network of offices, opened thus far in Russia, China, the Middle East, Europe, and Central Asia, to complement its headquarters in Washington, D.C.

“I’m thrilled to be coming home to Harvard,” said Mathews. “The world of education is globalizing, with consequences as profound as those for government and business.  Having spent more than a decade building a global think tank, I look forward to helping think through this great university’s international role and contributing all I can to the full range of the Corporation’s work.”

Awarding her the Thomas Jefferson Foundation Medal in Citizen Leadership this past spring, the University of Virginia cited Mathews’ “enormous impact on the world of international affairs” and her leadership in “advanc[ing] the Carnegie’s reputation for objective, influential, non-partisan analysis that provides insight into emerging transnational issues and explores collaborative solutions.”  She has published widely in scientific and foreign policy journals as well as the popular press, and has co-authored or co-edited three books, on topics from environmental management to nuclear security.

Mathews’ wide-ranging career has included service in the legislative and executive branches of the federal government, in management and research within the nonprofit arena, and in journalism.  After graduating from Radcliffe College in 1967, she earned a Ph.D. in molecular biology from the California Institute of Technology in 1973, then served on the staff of the Subcommittee on Energy and the Environment of the U.S. House of Representatives’ Committee on Interior and Insular Affairs.  She went on to serve from 1977 to 1979 as director of the Office of Global Issues at the National Security Council.  From 1980 to 1982, she was a member of the Washington Post’s editorial board, covering nuclear proliferation, arms sales, energy, environment, science, and technology.  She later wrote a weekly column for the Post.

Mathews was founding vice president (1982-93) and director of research (1982-88) of the World Resources Institute, an internationally recognized center for policy research on environmental and natural resource management issues.  She returned to government in 1993 as deputy to the undersecretary of state for global affairs.  From 1994 to 1997, she served as senior fellow of the Council on Foreign Relations and director of its Washington program.  While there, she published an article in Foreign Affairs, “Power Shift,” selected by the editors as one of the most influential in the journal’s 75 years.

An experienced board member in both the nonprofit and corporate sectors, Mathews currently serves on the boards of the Union of Concerned Scientists and the Nuclear Threat Initiative.  Previously, she has served as a trustee of Radcliffe College (1992-96) and a member of the boards of the Inter-American Dialogue (as co-vice chair), the Brookings Institution, the International Crisis Group, and four foundations (the Rockefeller Foundation, the Rockefeller Brothers Fund, the Century Foundation, and the Joyce Foundation).  She also serves as a director of SomaLogic, a biotechnology firm specializing in proteomics, and Hanesbrands Inc.  She co-founded the Surface Transportation Policy Project, has served on study groups of the National Academy of Sciences, and is an elected fellow of the American Philosophical Society.

Wells is a partner and co-chair of the litigation department at Paul, Weiss, Rifkind, Wharton & Garrison LLP.  The National Law Journal named him as one of the decade’s most influential lawyers in 2010, as lawyer of the year in 2006, and repeatedly as one of the 100 most influential lawyers in America.  According to the 2012 edition of the legal directory Chambers USA, Wells “is considered by many to be ‘the best trial lawyer in the country.’”

Wells is a 1972 graduate of the College of the Holy Cross in Worcester, where he went on to serve as a trustee.  His undergraduate experience at Holy Cross, as one of a small group of outstanding African-American students who navigated a turbulent time on campus and who rose to remarkable careers, is chronicled in the 2012 book “Fraternity” by Diane Brady.  Wells pursued his graduate studies at Harvard and received his J.D. and M.B.A. degrees in 1976.

“Education opens minds and expands opportunities, and nothing matters more to me,” said Wells.  “I greatly look forward to serving a university that has helped shape my own outlook and aspirations, and to supporting the work of people across Harvard whose ideas and efforts do so much to better the world.”

After clerking for Judge John Gibbons of the U.S. Court of Appeals for the Third Circuit, Wells practiced at the New Jersey law firm Lowenstein Sandler for more than twenty years before being recruited to Paul, Weiss, one of the nation’s premier law firms, where he has co-chaired the litigation department for the past twelve years.  His wide-ranging practice encompasses white-collar criminal defense, complex civil and corporate litigation, SEC regulatory work, health care investigations, environmental matters, and class action litigation.

Long devoted to the advancement of civil rights, Wells is chairman emeritus of the board of directors of the NAACP Legal Defense and Educational Fund, widely regarded as the nation’s leading civil rights law organization, which awarded him its Thurgood Marshall Lifetime Achievement Award in 2011.  Active in civic and political affairs, he was the national treasurer for Senator Bill Bradley’s 2000 presidential campaign, was New Jersey co-chair of the United Negro College Fund, and has served on a pro bono basis as general counsel to both the New Jersey NAACP and the New Jersey Democratic Party.  He has also served as a trustee of the New Jersey Performing Arts Center and is a past recipient, with his wife, Nina Mitchell Wells, of the Ryan Award for commitment to the NJPAC and leadership in the City of Newark.

Wells has extensive experience with corporate governance issues, through his legal practice as well as his past service on the board of directors of CIT Corporation, where he was a member of the audit committee.  He has taught in the Harvard Law School Trial Advocacy Workshop and has lectured on diverse legal topics for the Practising Law Institute and the Securities Regulation Institute, among other organizations.  He is a fellow of the American College of Trial Lawyers and a member of the International Academy of Trial Lawyers.