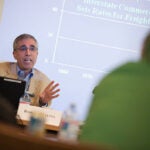 A new Harvard study explodes the commonly held image of the stressed-out boss, revealing that leaders actually have lower stress levels than lower-ranking individuals, likely because they have greater control over their office lives.

The study, published online in this week’s Proceedings of the National Academy of Sciences, compared stress indicators, including levels of the hormone cortisol and self-reported anxiety, between groups of leaders and nonleaders.

“The conventional wisdom is it is very stressful to be the top dog, the CEO or the military general. There are an increasing number of popular press books stemming from the idea that the top dog needs help managing stress,” Lerner said. “Our results indicate that the top dog has less stress as measured by baseline cortisol. That is quite surprising to some people.”

The study, part of a large-scale, four-year project supported primarily by the National Science Foundation, was conducted with colleagues from Harvard, Stanford University, and the University of California, San Diego. It consisted of two parts. In the first, Lerner and colleagues compared cortisol and self-reported anxiety levels between a group of nonleaders, mostly from around Greater Boston, and a group of leaders, mostly participants in a Harvard Kennedy School executive education program that typically attracts mid- to high-ranking government and military officials. Results showed that leaders had both significantly lower levels of cortisol and lower anxiety than nonleaders.

In the study’s second part, researchers examined the same two variables among another sample of leaders, finding that higher-ranking leaders had lower levels of both cortisol and anxiety than lower-ranking leaders. Researchers found that the greater sense of control that comes with higher leadership levels helped explain the reduced cortisol.

Examining those results in greater detail, researchers found that two measures of leadership — the total number of subordinates and authority over subordinates —were significant in creating that sense of control. The number of people who report directly to a leader — which would indicate greater day-to-day management — did not, however.

The study originated in a decidedly unscientific fashion, Lerner said. Although she typically conducts experiments to investigate specific theories, this study stemmed from an accident of location: Her office in the Kennedy School’s Center for Public Leadership faces the quadrangle where visiting leaders’ motorcades pull up, allowing Lerner to watch the deference and ceremony with which they’re met. Once she started thinking about the topic, she understood that the executive education programs offered a resource through which stress and leadership status could be explored.

“It was absurdly a-theoretical at its inception,” Lerner said. “A common criticism of psychology research is that we study college students as subjects. Supposedly, if we studied employed, successful adults, we would observe different results. Well, we have extremely successful people come into executive education programs — indeed some are world leaders. I thought this was an opportunity to test that common criticism and to expand our knowledge in how meaningful status differences play out in emotion, decision making, and stress.”

Gary Sherman, a postdoctoral fellow in the Decision Science Lab and the paper’s first author, said the less-stress finding is the paper’s most surprising, but that it’s also important that researchers were able to track that to the sense of control that leadership enables.

Sherman and Lerner noted that the study primarily tested leaders who are in stable positions and supported by their organizations. Leaders in unstable situations they termed “contested hierarchies” likely have higher stress levels.

Lerner said the results could help employers better manage stress levels in the workforce, perhaps by giving stressed-out lower-level managers more control. Lerner said the lab, one of the few behavioral labs at a school of public policy, is engaged in further studies examining the role of other hormones, like testosterone, and the role of DNA in leadership.

The research provides insights not only to the scientific community but also to the participants themselves, Lerner said, adding that the executive education students seem to enjoy participating and receiving feedback from the work.

“We share findings with the participants in every class. It gives my colleagues and I a chance to support individuals who have dedicated their lives to public service, whether that dedication takes the form of being a military leader, an elected official, or a diplomat. Occasionally, we even have Navy SEALs in the lab. They experience high stress during situations that require fast, accurate decisions. We have a lot to learn from them,” Lerner said. “I’m looking forward to years of research with this kind of population.”