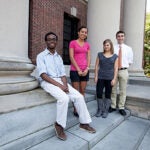 Award is considered precursor to Nobel

Richard M. Losick, the Maria Moors Cabot Professor of Biology at Harvard, has been named one of three winners of the 2012 Louisa Gross Horwitz Prize by Columbia University in recognition of his work to understand the intricate, dynamic, and three-dimensional organization of bacterial cells.

Losick shares this year’s prize with Joe Lutkenhaus, a University Distinguished Professor at the University of Kansas Medical School, and Lucy Shapiro, the Virginia and D.K. Ludwig Chair in Cancer Research in the Department of Developmental Biology at the Stanford University School of Medicine.

“The research of these three superb pioneers has led to major insights into the biochemistry and molecular biology of the living cell. It has helped establish the simple bacterial cell as one of the most powerful models for understanding the cycle of cell life and death,” said Gerard Karsenty, chair of the Horwitz Prize committee and chair of the Department of Genetics and Development at Columbia University Medical Center.

Losick’s work has centered on revealing the nature of three-dimensional regulation in bacterial cells, and has provided a basis for understanding the properties of cellular asymmetry. He also dissected the gene regulatory mechanisms that govern systems for cellular differentiation. In addition, he discovered the interplay of spatial dynamics and regulatory mechanisms that yield morphologically differentiated cells with different cell fates. Over the past two decades, Losick has also collaborated with Shapiro on eight original papers that examined the structure and biology of the bacterial cell.

Established in 1967, the Horwitz Prize is Columbia University’s top honor for achievement in biological and biochemistry research, and is widely considered a precursor to the Nobel Prize. Of the 87 Horwitz Prize winners to date, 42 have gone on to receive Nobels.