Link found between ALS and SMA 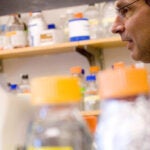 Flipping the switch that halts obesity

May lead to common treatment for both fatal conditions

Researchers of motor neuron diseases have long had a hunch that two fatal diseases, amyotrophic lateral sclerosis (ALS) and spinal muscular atrophy (SMA), might somehow be connected. A new study confirms that this link exists.

“Our study is the first to link the two diseases on a molecular level in human cells,” said Robin Reed, Harvard Medical School professor of cell biology and lead investigator of the study.

The results will be published online today in Cell Reports.

ALS, or Lou Gehrig’s disease, which has an adult onset, affects neurons that control voluntary muscles. As a result, muscles start to weaken, and patients eventually lose the ability to move their arms, legs, and other parts of the body. In contrast, patients who have SMA tend to be infants and young children. Symptoms are similar to ALS, with lack of ability to control muscles being the major symptom. In both diseases, the most common cause of death is the loss of muscle function in the chest, resulting in respiratory failure.

Previous studies have shown that one of the causes of ALS is mutation of the FUS gene, and that a deficiency in a protein called the survival of motor neuron (SMN) protein causes SMA disease. The SMN protein is present in bodies in the nucleus known as Gemini of coiled bodies, or gems. Reed’s lab connected the FUS protein to the SMN protein and the formation of gems in cellular nuclei.

“Nobody really knows what the function of gems are,” said Reed. “The consensus so far is that they might be involved in biogenesis of crucial nuclear RNAs.”

The researchers arrived at this pathway by studying human fibroblasts, cells that form the basis of connective tissue. “Unlike other studies of ALS and SMA, in which post-mortem tissue is normally used, we used fibroblasts from patients. These cells are easily accessible because they can be obtained from patients’ skin, and [they] may provide a better idea of what happens in the human body,” said Reed.

Reed and colleagues began the study by showing that the FUS protein is essential for normal gem levels. Without it, gem levels in ALS fibroblasts are much lower than in control fibroblasts.

This feature of ALS fibroblasts led the team to connect the disease with SMA. Previous studies had shown that when cells were deficient in SMN protein, fibroblasts also lacked gems in the nuclei. The loss of gems as a final result in both the SMA and ALS pathways led Reed and her team to believe that they might, in fact, be part of one larger pathway.

“The question now is whether the loss of gems is a cause of the disease or a marker for the disease,” said Reed.

Either way, Reed describes these findings as killing two birds with one stone. “This common pathway may mean common treatment and resources.”

This work was supported by grants from the National Institutes of Health, as well as aid from Toyobo Biotechnology Foundation, the ALS Therapy Alliance, and the ALS Association.