Health in the balance 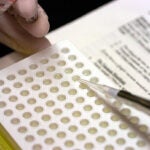 Mapping a genetic world beyond genes

This is the first installment in a three-part Harvard Medical School series on childhood obesity.

“Do you have a TV in your bedroom?” asks Elsie Taveras, associate professor of population medicine and pediatrics and co-director of the Obesity Prevention Program at Harvard Medical School’s (HMS) Department of Population Medicine. “What do you like to drink at home?”

She’s speaking with Tiarra Francis, an 8-year-old from Dorchester. Tiarra’s mother has brought her to Taveras’ One Step Ahead Program at Boston Children’s Hospital, because she’s worried about Tiarra’s weight. “These girls at school, they call me fat, they call me ugly,” says Tiarra, her brown eyes wide. “That’s rude and sad to me.”

But it’s not Tiarra’s appearance that has Taveras concerned. “See this dark ring?” she says to Tiarra’s mom, pointing to the child’s neck. “It could be an early sign of insulin resistance,” a precursor to diabetes.

Tiarra, whose struggle with her weight is chronicled in “Weight of the Nation,” an HBO documentary series about America’s obesity epidemic, isn’t alone. According to the Centers for Disease Control and Prevention, nearly 17 percent of US children are obese, defined as a body mass index at or above the 95th percentile. (Percentiles come from a time when the country’s population was thinner, which is why more than 5 percent can be above the 95th percentile.) Those numbers have remained steady for 12 years. Even more troubling, there are significant racial and ethnic disparities, with black and Hispanic children more likely to be obese than their white peers.

Taveras is one of many Harvard researchers studying the roots and implications of childhood obesity. Researchers throughout the Harvard community are uniting with one goal in mind: to stop the crisis in its tracks.

“Childhood obesity is one of the biggest problems in this country,” says Lee Nadler, dean for clinical and translational research at HMS and director of Harvard Catalyst, an initiative that enables collaboration by providing tools, training, and technologies to clinical and translational investigators. “It can affect anyone, regardless of their race, ethnicity, or social status.” For Nadler, that’s a powerful reason for researchers to forge new connections and propose novel solutions to the problem. Last spring, Harvard Catalyst hosted a meeting that brought together experts in childhood obesity, many connecting with one another for the first time. “Some of the biggest players in the field,” Nadler said.

Divided into working groups, the attendees — pediatricians, researchers, public health advocates, lawyers, and M.B.A.s — brainstormed ways to tackle the issue. By morning’s end, they were sharing ideas and proposing solutions ranging from banding together against junk food manufacturers to improving outdoor play spaces. Harvard Catalyst committed to awarding a total of $450,000 in pilot grant money this fall to those collaborations deemed most promising.

Tiarra’s tales of bullying certainly resonate with many overweight and obese children. But what many parents once viewed primarily as a problem of self-esteem and appearance has become a major health issue: Being chosen last for kickball and shopping in the plus-size aisle now pale in comparison to the increased risk of diabetes, heart disease, high blood pressure, asthma, and cancer. And many of these threats aren’t as distant as some people imagine.

A recent New England Journal of Medicine study by researchers including David Nathan, an HMS professor of medicine and director of the Diabetes Center at Massachusetts General Hospital, suggests that type 2 diabetes appears to progress more quickly and may be harder to treat in children than in adults. The large study — the first of its kind because type 2 diabetes was once rare in children — followed 699 diabetic children ages 10 to 17 for four years. After just a few years, an oral medication used to treat type 2 diabetes in adults had already stopped working in about half the young patients, who then had to add daily insulin injections to their regimen. That’s a serious problem, researchers say, because poorly controlled diabetes is more likely to lead to complications such as heart disease, vision troubles, nerve damage, kidney failure, and amputation.

There’s good evidence of links between a child’s weight and his or her risk of other diseases, too. A large 1999 study, led by HMS Professor of Medicine Carlos A. Camargo Jr., found that, contrary to popular belief at the time, obesity appears to increase the risk of asthma in children, a finding subsequent studies have supported. Perhaps most distressing: A 2005 study by researchers including David Ludwig, an HMS professor of pediatrics and director of the New Balance Foundation Obesity Prevention Center at Boston Children’s Hospital, predicted that childhood obesity could shorten the average person’s life span by two to five years, because conditions such as heart disease, diabetes, cancer, and kidney failure are likely to strike these people at younger ages.

“We don’t need to wait until adulthood to see the effects of childhood obesity,” says Matthew Gillman, professor and director of the Obesity Prevention Program in the HMS Department of Population Medicine. “It’s not just causing psychosocial distress. Asthma, diabetes, orthopedic issues — they’re all happening to kids right now,” he notes.

The complications of childhood obesity are shocking, but — on the surface — the causes seem clear. As with adults, the basic formula of “energy in, energy out” still holds true. Kids are consuming more calories (often in the form of fast food and sugar-sweetened beverages) and burning fewer of them. Yet there’s more to the story. When it comes to children, the roots of obesity appear to run deeper.

“We’re discovering that what happens very early in human development can have lifelong implications on health,” says Gillman. “When it comes to childhood obesity, prevention needs to start in the womb — or even before.”

Next week: In utero intervention