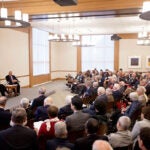 Harvard University announced today that its endowment posted a -0.05% return and was valued at $30.7 billion for the fiscal year that ended June 30, 2012.  The fiscal year 2012 endowment return was 98 basis points in excess of the -1.03% return on the benchmark Policy Portfolio.

Jane Mendillo, president and CEO of Harvard Management Company (HMC), said, “The markets during the last year continued to be choppy and highly sensitive to unresolved macroeconomic headwinds.  While investment performance over the last 12 months was well below long-term averages, we nevertheless found good investment opportunities through both internal and external management that we believe will sow the seeds for future growth.  We are also pleased to have outperformed our Policy Portfolio benchmark for the third year in a row.

Harvard’s endowment helps to fund operations critical to the University’s educational and research objectives. In fiscal 2012, distributions from the endowment contributed more than a third of the operating budget. Endowment income supports Harvard’s academic programs, science and medical research, and student financial aid programs, which allow the University to admit qualified students regardless of their ability to pay.

“Despite difficult markets, we are pleased that investment performance remained steady and [that] the endowment was able to provide substantial support to the University,” said James Rothenberg, University treasurer.  “In such volatile economic times, it’s important to note that results in any 12-month period can vary dramatically.  Jane and her team have done an excellent job strengthening Harvard’s portfolio, and I’m confident the endowment is well positioned for the long term.”

The endowment has earned an average annual return of 12.3% over the past 20 years, outperforming the Policy Portfolio benchmark by over 300 basis points per year and a simple 60/40 stock/bond portfolio by even more substantial margins.

The endowment allows Harvard to undertake specific activities that donors have supported over the years, in areas including staff and faculty salaries, facilities maintenance, and Harvard’s generous financial aid programs.

More than 60% of Harvard undergraduates are receiving need-based scholarship aid this year, totaling more than $172 million. The average undergraduate student on financial aid pays only $12,000; in addition, an average of one in five students pays no tuition, based on economic need. Throughout Harvard, scholarships and awards to students from University funds have almost tripled over the past decade, passing $460 million. The College’s industry-leading financial aid policies are designed to make Harvard more affordable for families across the economic spectrum, a commitment that has remained a high priority despite the current economic uncertainty.

The endowment is not a single fund, but comprises more than [12,000] individual funds, many of them restricted to specific uses such as support of a research center or the creation of a professorship in a specific subject. The funds are invested by HMC, which oversees the University’s endowment, pension, trust funds, and other investments at a significant savings relative to outside management.

The endowment’s total value is affected by several factors each year, including investment returns, new contributions, and the annual payout for University programs.