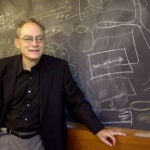 They were old friends last weekend, even those who’d never met.

Members of Harvard’s governing boards past and present gathered at Harvard Law School’s (HLS) new Wasserstein Hall Saturday for a reunion that provided a chance not only to renew past acquaintances, but also to make new friends among the community of people who have guided Harvard in recent decades.

The reunion’s social aspects were balanced by substantive discussions of Harvard’s own present and future during a panel talk about innovation in teaching and learning and a question-and-answer session with President Drew Faust moderated by Harvard Overseer Walter Isaacson, president of the Aspen Institute and author of several notable biographies.

The event was attended by more than 160 people from as far away as Anchorage and Mumbai, including current and past members of the governing boards, Harvard deans, and other University administrators. Also in the group were the six new members of the Board of Overseers, Scott Abell, James Johnson, Michael Lynton, Tracy Palandjian, Swati Piramal, and Kathryn Taylor, all elected this year.

Current Overseer Walter Clair, a Nashville cardiologist, said he had taken part in an orientation of the newest Overseers earlier in the day and relished the chance to get acquainted or reacquainted with members of the boards from years past.

“I’m seeing some colleagues I knew on the Board from years gone by. And this afternoon I met the new Overseers. It’s a wonderful way to bring together the past and the future,” Clair said.

Patti Saris, a Boston federal judge and former Overseers president, said the best part of her service on the Board was the people she was able to meet and the wide range of issues she was able to deal with.

“I wouldn’t miss this for the world,” Saris said. “It’s great to see everyone.”

Leo Beranek, a noted scientist and former Overseer whose Harvard electro-acoustics lab designed communications equipment and noise reduction gear for World War II aircraft, made the trip to join the reunion just a week after turning 98. And Mitchell Adams, who left the Board in 2011 after serving as vice chairman of its executive committee, said though he lives in nearby Dedham, he’d have come from much farther away, if he had to, in order to attend.

In reflecting on his years as an Overseer, Adams said his most notable action was taking part in the election of Drew Faust as Harvard’s 28th president.

“That was very substantial; I’d have to say that was the most important thing,” Adams said.

Adams said he’s also proud of Harvard’s leadership role in recognizing and supporting diversity of all kinds, including Harvard’s groundbreaking endowment of a named visiting professorship in the study of gender and sexuality.

“Harvard is out front as a leader in these matters,” said Adams, former head of the Massachusetts Technology Collaborative.

Faust and the Corporation’s Senior Fellow Robert Reischauer, president emeritus of the Urban Institute, welcomed the group, saying they were glad so many were able to return.

Although the reunion offered an opportunity to reminisce, its programmatic focus was on Harvard’s future. A panel on innovative teaching provided a glimpse at changes in Harvard’s arts and humanities classrooms, in the M.B.A. program at Harvard Business School, and in legal education. It also featured the University’s new edX joint venture in online learning with the Massachusetts Institute of Technology (MIT) and the University of California, Berkeley.

Diana Sorensen, the Rothenberg Professor of Romance Languages and Literatures and dean of arts and humanities in the Faculty of Arts and Sciences, spoke about how the University is rethinking arts and humanities education, designing new, broad-based foundational courses that will challenge students to explore ways of listening, ways of reading, and ways of looking.

Harvard graduates, she said, should not only cultivate deep knowledge in a particular field. They should emerge from college as persuasive speakers and perceptive listeners; as clear, elegant writers, able to speak, read, and write in a language in addition to English; and as observers and thinkers with an understanding of worldviews different from their own.

At Harvard Business School (HBS), first-year M.B.A. students are also getting a view of the world, up close and personal. The School’s tried-and-true case method of teaching is being augmented with a new Field Immersion Experiences for Leadership Development (FIELD) program, in which student teams work on real-world business problems that introduce them to societies in different parts of the world, from Ghana to China to Turkey. After working out an approach to the problem while studying at HBS’s Allston campus, the students travel far afield to the site, where they put their ideas to the test.

Youngme Moon, David Professor of Business Administration and senior associate dean and chair of HBS’s M.B.A. program, said the experience is often transformational for students, who directly confront the real-world ramifications of their work and experience it not only intellectually but also viscerally. The experience forces them to improvise when their suggestions don’t prove practical and to engage in a cross-disciplinary way with the problem and the people involved. Many participants in the FIELD program’s first year say it was not only their most difficult course, but also their most rewarding, Moon said.

“What they encountered on the ground, it startled them, shook them, astonished them, forced them to pivot immediately, forced them to throw assumptions out the window,” Moon said. “Field-based learning … is powerful not only because it forces students to engage in a cross-disciplinary way, but because it also consumes them experientially.”

Jonathan Zittrain, professor of law at HLS and of computer science at the School of Engineering and Applied Sciences, and a faculty member at the Harvard Kennedy School, said the continued development of the Internet and digital technology has put us at a “rare and pivotal moment” in Harvard’s history. The Law School, he said, is rethinking how its students engage with the great many judicial opinions that form much of the core of the Law School curriculum.

Because many of the cases are available for free online, faculty are considering alternatives to the traditional casebook and developing a platform that will allow professors to annotate digital versions of the cases and to organize and compare them in novel ways. They’re also creating interactive tools for students to comment on each other’s work and to interact online with students at institutions around the world.

The largest extension of Harvard’s digital reach may turn out to be edX, the online learning effort that Harvard launched with MIT last spring and that UC Berkeley has since joined. Robert Lue, professor of the practice of molecular and cellular biology, director of life sciences education for the Faculty of Arts and Sciences, and faculty director of HarvardX, the Harvard-specific component of edX, said that the past 10 years have seen dramatic changes in the nature and potential of online learning.

A decade ago, Lue said, many people saw online education as little more than the posting of lecture videos for students to watch. Today, he said, there are many more ways for instructors and students to interact, for more active modes of learning to come to the fore, and for online experiences to create a powerful complement to more traditional classroom experiences.

Many questions remain around edX, Faust said, addressing the topic later in response to questions from Isaacson. Faust, who covered a range of topics, from the use of common spaces to build community to the University’s expanding international agenda to Harvard’s financial situation, said that outstanding edX questions include how it can strengthen teaching on campus as well as beyond, how it can improve the assessment of learning methods, and what the underlying business model should be.

Faust also held up Harvard’s i-lab as an example of innovation on campus. The lab, located in Allston, is intended as a place to foster innovation and entrepreneurship among Harvard’s students and faculty and is also open to the surrounding community. More generally, Faust spoke of the growing cross-disciplinary collaborations on campus as faculty members from different Schools work across traditional boundaries on the big problems facing the academy and the larger world.

Global health, for example, not only involves public health strategies and advances from medical research, but it involves knowledge of supply chains, of public policy, and of the customs and cultures of other societies.

“This is not something I’m prescribing,” Faust said of the rise of scholarship and learning across School boundaries. “This is what’s happening. It’s what our students and faculty want,” she said.

The evening closed with celebratory toasts from James R. Houghton, the Corporation’s former senior fellow, Reischauer, the current senior fellow, Richard Meserve, president of the Carnegie Institution for Science and current Overseers president, and Faust. All highlighted the two governing boards’ growing interactions with one another and their members’ collective devotion to Harvard’s long-term progress.

Quoting from the inaugural address of Charles William Eliot, Harvard president from 1869 to 1909, Meserve offered a toast to “our ‘double-headed organization’— and all that it contributes to ‘the permanence and ever-widening usefulness’ of the great university entrusted to our care.”

Reunion of past and present members of Harvard's Governing Boards