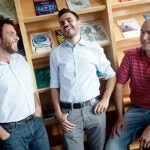 With the 2015 deadline to meet the United Nations’ Millennium Development Goals (MDG) approaching, scholars and government officials gathered at the Harvard School of Public Health (HSPH) on Tuesday to search for lessons in the dramatic progress that Brazil has made in recent decades.

The Harvard-Brazil Symposium, held in HSPH’s Kresge Building, featured discussions of the health-related goals and of Brazil’s progress in meeting them. It was sponsored by the Department of Global Health and Population, which is marking its 50th anniversary, as well as the Harvard Global Health Institute and Fundação Maria Cecilia Souto Vidigal.

The result, he said, has been an unprecedented level of funding for the needs outlined, as well as progress that has been, in some cases, spectacular. Yet much remains to be done, making the search for examples that might be adapted to other situations an important strategy.

“The challenges that remain are enormous,” Frenk said.

Luciana Mendes Santos Servo, health coordinator at the Institute for Applied Economic Research in Brazil, traced the changes in that country to Brazil’s 1988 constitution, which recognized health as a right for citizens and created a government obligation to improve it.

That sparked the creation of several social welfare programs and reform of the health care system from one that was centered on hospitals and financed by private insurance, held mainly by those in the formal labor pool, to one that emphasized primary care and was open to all.

Brazil has already achieved the goals for reducing poverty and hunger and is on track to achieve the goals involving child mortality and universal education. Maternal health in the nation has improved, but the goal appears out of reach by 2015. Mendes credited three programs with the bulk of the change: a social security benefit for the elderly, a cash-transfer program for poor families, and a family health program that focuses on primary care.

While those programs appear to have been effective, some audience members questioned whether the cost burdens they put on government, particularly in an economic downturn, are sustainable. Mendes said that future financing will be a challenge, because she believes the government can’t raise taxes further.

Eduardo Rios Neto, a professor at Brazil’s Federal University of Minas Gerais, said the government programs were helped along by a period of economic growth and improvement of the labor market, and that, despite recent progress, social and income inequality in Brazil remain a major problem.

Brazil’s progress doesn’t mean its health challenges are over either, Mendes said. The rise of noncommunicable diseases, like heart disease, diabetes, and cancer, is a growing challenge.

“We have progressed, but we have some challenges,” Mendes said.