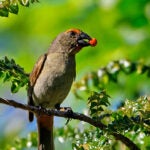 From research showing that adults in an Amazon village had about equal competence to Harvard students at basic geometry, Elizabeth Spelke drew a striking lesson.

“Amazonian adults look like Harvard students, not like kids,” Spelke, a professor of psychology, told a packed room at the Barker Center Thursday night. “We learned that knowledge of Euclidian geometry can develop in the absence of schooling.”

The surprising results from the study of Brazil’s Munduruku show that formal learning is not needed to develop navigational skills, said Spelke, director of the Laboratory for Developmental Studies.

Spelke, whose lab is renowned for research into the development of language and other bedrock cognitive skills, focused in her talk on research into how animals and humans place themselves and navigate. The experiments involve spinning research subjects — whether humans or lab rats — until they lose their bearings, and studying how they reorient themselves in a spartan room.

Infants and toddlers are adept at using geometric clues to orient themselves in three-dimensional space to find a hidden toy, but less so if their bearings have been disturbed. Lab rats had the same problem, and were unable to process complex decisions or to integrate more than one element. Somewhere along the development continuum, humans, whether at Harvard or in a village along the Amazon, develop the ability to integrate a second distinguishing characteristic — such as a wall painted a different color — to get their bearings. The function of navigation is innate to humans.

The frontier is in understanding how it develops.

“How does it become natural to us?” she asked.

Spelke found no differences in navigational skills based on gender.

“There are no sex differences,” she said. “People are really good at this. It’s something we do without being aware of it.”

But with more dependence on computers and robots, our abilities might be at risk, she said, seizing on an audience member’s question about the effects of technology, such as smartphones, on child development.

“I am worried we’re all going to be using GPSes all the time,” Spelke said. “The Mundurukus are better than Harvard students because they have to keep navigating all the time.”

Drivers in modern societies rely heavily on GPS navigation. Looking at a map is almost old-fashioned.

“I’m worried it will cause our systems to atrophy,” Spelke said.

“We’re doing this enormous experiment on ourselves and our children and grandchildren,” she said. “Innate systems disappear if you don’t use them. It’s a real question of what’s going to happen with all this.”