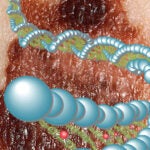 Researchers at Harvard-affiliated Beth Israel Deaconess Medical Center (BIDMC) have found that a type of immune system cell once thought rare in humans is actually plentiful in fat cells and protects against obesity and the metabolic syndrome that leads to diabetes.

iNKT cells had been thought to be rare in humans until work by Lydia Lynch, a research fellow in medicine at Beth Israel, found they were plentiful in human fat, also known as adipose tissue.

“Our previous work had revealed a large population of iNKT cells in fat tissue in both mice and humans,” said Lynch, a research fellow in the Department of Hematology/Oncology at BIDMC and the study’s first author. “Now we have identified them in mice and identified a role for them in the regulation of body weight and the metabolic state, likely by regulating inflammation in adipose tissue.”

Together with senior author Mark Exley, assistant professor of medicine at Harvard Medical School (HMS) and a leader in the field of natural killer T-cell (NKT) investigations, the team also discovered that a lipid called alpha-galactosylceramide (aGC) can lead to a dramatic improvement in metabolism, weight loss, and fatty liver disease, and can reverse diabetes by bolstering cells that have been depleted.

Lynch first began this line of investigation in 2007 in her native Ireland, where her work in the Obesity Clinic at St. Vincent’s University Hospital in Dublin focused on the immune systems of obese patients.

“We knew that not only did obese patients have more heart attacks and a greater incidence of type 2 diabetes than lean individuals, but they also developed more infections than non-obese individuals,” she said.

Blood samples taken from these patients revealed that both NKT cells and iNKT cells were decreased, and subsequent studies of fat tissue from a group of obese patients who had lost weight following bariatric surgery showed that iNKT cells had increased to normal levels.

This data identified candidates for a protective role against the previous findings that adiposity because of diet (and negative energy expenditure) is the trigger for increased inflammation of fat tissue, which subsequently leads to insulin resistance and metabolic disorder.

In this new research, conducted with colleagues at BIDMC, St. Vincent’s, and Trinity College Dublin, the authors conducted a series of animal experiments to test their hypothesis that iNKT cells play a role in fat tissue regulation and protect against the development of inflammation and the metabolic syndrome.

Knowing that mice have iNKT cells in their liver tissue, the authors first ascertained that, like humans, the animals also harbored these cells in fat tissue.

“We found loads of them,” Lynch said.

The research team then put the mice on a high-fat diet and studied the outcome.

“Similar to the human subjects we had previously studied, the animals lost their iNKT cells when they became obese,” Lynch said. “Once we took them off this diet and put them back on a normal standard-fat diet, they lost the weight — and their iNKT cells increased.”

In the next experiment, the authors set out to better understand the exact role of the iNKT cells by examining two strains of mice, both of which are deficient in iNKT cells, and a group of control mice, all on a high-fat diet.

Although all the animals grew obese, the iNKT-deficient mice grew 30 percent fatter than the control animals and developed the mouse equivalent of type 2 diabetes over just six weeks. The mice also had greatly increased triglyceride levels, larger fat cells, and fatty liver disease.

Next, the authors removed iNKT cells from a normal mouse and injected them into obese NKT-deficient mice.

“We actually reversed the diabetes, and even though the mice continued to eat a high-fat diet, they lost one to two grams of weight [normal mouse weight being 20 to 25 grams] and exhibited a host of features that suggested reduced inflammation, including improved insulin sensitivity, lower triglycerides and leptin, and shrunken adipocytes,” Lynch said.

Finally, in order to demonstrate if the remaining diminished pool of iNKT cells in obesity could be activated to improve metabolism, the scientists tested aGC, a lipid known to activate iNKT cells. They found that administering a single dose of aGC caused a dramatic improvement in metabolism and fatty liver disease, loss of much of the weight gained, and reversal of diabetes in the obese animals.

“aGC has been tested in clinical trials for the treatment of certain cancers, including melanoma, and proven safe and produced few side effects in humans,” said Exley. “The effect of NKT stimulation, whether by aGC or other means, on weight loss, obesity, and metabolic disorder has not been investigated until now and may provide a new avenue for the treatment of obesity and metabolic syndrome, which have now reached epidemic proportions worldwide.”