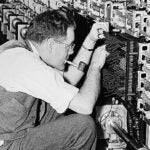 From Harvard specialists, green thinking with a sense of urgency

Six of Harvard’s deepest thinkers on the environment warned about a worsening climate crisis, even as they shared promising new technology, new ideas about city design, and examples of how markets can be used to meet the challenges of sustainability.

The faculty members spoke Tuesday at Sanders Theatre as part of Harvard Thinks Green 2, a sustainability-focused event that gave each presenter 10 minutes to talk about their ideas on the environment.

The presentations of Harvard geologist Daniel Schrag and atmospheric chemist James Anderson framed the problem for the audience, offering the dramatic example of Arctic sea ice melt that this summer surpassed even 2007’s record melt, when the Northwest Passage between the Atlantic and Pacific was ice-free for the first time since recordkeeping began.

“We are beginning to see signs of what I would term a planetary emergency,” Schrag said.

Harvard’s biggest impact on the problem may not come from a specific invention or the University’s own efforts to decrease its carbon footprint, but rather through the efforts of students and alumni as they take leadership positions in the world, several speakers said. That impact, however, can be realized only if students leave Harvard with the knowledge to both understand and act on the problem.

The event was modeled after the popular TED talks, in which prominent specialists in a variety of fields offer short presentations on their best ideas. It was sponsored by the Harvard Office for Sustainability, the Harvard University Center for the Environment, and the student group Harvard Thinks Big.

Heather Henriksen, director of the Office for Sustainability, introduced the event, highlighting Harvard’s progress toward its own goal for reducing greenhouse gas emissions. The University has made progress, with emissions down 7 percent since 2006, even with growth of 13 percent. Still, Henriksen said, there is a long way to go to reach the goal of a 30 percent reduction by 2016, one that she urged students help the University to meet.

Schrag, the Sturgis Hooper Professor of Geology, professor of environmental science and engineering, and director of the Harvard University Center for the Environment, kicked off the talk with images of this summer’s Arctic sea ice melt. The Northwest Passage was open, as in the “shocking” summer of 2007; the Northeast Passage, ice-locked for so long that Schrag described it as “fabled,” as well.

“Not only is it open, it is wide open,” Schrag said. “Suddenly the prediction we heard a few years ago — that seemed crazy — that the Arctic might be ice-free by the middle of the century, now looks wildly conservative.”

Both Schrag and Anderson, the Philip S. Weld Professor of Atmospheric Chemistry, said the changes are likely irreversible.

Not only does it take tens of thousands of years for nature to purge the carbon dioxide we’re adding, but the warming can trigger enormous planetary feedbacks that make it impossible to go back.

In the Arctic, Anderson said, melting ice exposes dark ocean water, which absorbs the sun’s heat more efficiently than reflective ice. The open water also allows warmer flows from the south and exposes the surface to warmer winds. Once the heat is in the system, Anderson said, there’s no way to take it back out and return to a cooler regime.

“We go from the condition of ice in the Arctic and Antarctic … and we move to a condition where the ice is gone; we cannot get back to the earlier state,” Anderson said. “The reason we can’t get back are the intrinsic feedbacks in the system that control that irreversibility.”

In addition to the extent of Arctic ice shrinking dramatically, its thickness is falling as well, Anderson said. Measurements in 1955 found the ice to average 3.5 meters thick, a figure today that is just 1.5 meters, he said.

And ice is melting elsewhere. As recently as 1985, there was no surface melting on Greenland’s massive ice sheet, Anderson noted. In 1992, surface melting was observed; in 2005 as much as half the surface had meltwater on it; and this summer the entire surface was covered by meltwater. Meltwater is a particular problem, Anderson said, because it runs down through the glacier, breaking the bond of the ice with the land and lubricating that interface, raising the risk of the sheet’s collapse. The Greenland ice sheet has enough water to raise sea levels by 7 meters. A 3-meter increase would inundate Harvard.

Joyce Rosenthal, assistant professor of urban planning at the Harvard Graduate School of Design, highlighted new thinking about design in a world that is rapidly urbanizing, with more than half of humanity today living in cities.

One thing that is clear, Rosenthal said, is that the U.S. model of urban design, with large sprawling cities surrounded by suburbs that demand car travel, is unsustainable.

Instead, she said, tomorrow’s cities could revisit the design of Europe’s old, walkable cities — 10 times as dense as the typical U.S. city — where shops and other services are integrated with residences and public transit is located somewhere within a walkable 20 minutes. New designs could have “pedestrian pockets” — walkable centers where residences and services are clustered — spread along a transit line such as light rail or express bus.

Beyond design, Rosenthal said that many cities are working to become more sustainable through initiatives such as green rooftops, car-free city centers, anti-sprawl zoning regulations, and converting stormwater conversion.

Creating innovative living spaces is no easy feat, however. Amy Edmondson, the Novartis Professor of Leadership and Management at Harvard Business School, discussed the clash of cultures sometimes created by such projects. Truly innovative spaces require the collaboration of everyone from architects to building contractors to real estate developers to IT people to government officials. Each of these specialties, she said, has its own culture and way of doing business.

Though it will take tens of thousands of years for the Earth to purge the carbon dioxide we’ve already added, if we can stop using fossil fuels by the end of the century we might avoid the most catastrophic effects, Schrag said.

To do that will require a paradigm shift that changes our entire relationship with energy, according to several speakers. While such revolutions are rare, they do happen. Schrag highlighted the shift from whale oil to petroleum products in the late 1800s and the Green Revolution, in which modern agricultural techniques and technological advances provided food for the world’s burgeoning population.

Daniel Nocera, the Patterson Rockwood Professor of Energy, cited the equally revolutionary shift from horses to automobiles, something so unthinkable at the end of the 19th century that prognosticators worried about the dimensions the problem would take in the decades to come, predicting the rapidly mounting piles of horse manure by 1950 would fill the streets of London to nine feet.

Nocera is among the scientists working toward such a paradigm change. He has developed a relatively inexpensive, easily manufacturable device, called an “artificial leaf,” that uses sunlight to split water into oxygen and hydrogen, which can be used as a fuel. This device — or something similar — has the potential to provide a pathway to modernization for the billions of the world’s poor and for the estimated three billion in population growth expected by mid-century.

Nocera’s numbers provided a stark reality check as to the extent of the change required. The world’s expected energy demand will roughly double by mid-century, which would require an enormous expansion of all kinds of renewable energy sources to meet it. The allotment of nuclear power alone — some 8 terawatts — would require building 200 nuclear plants a year between now and then.

As an alternative, there’s enough energy in the water in Blodgett Pool, if it can be harnessed by a device like Nocera’s artificial leaf, to meet the projected mid-century global energy needs.

Any new technology has to be marketed and distributed to be successful, however. Joseph Aldy, assistant professor of public policy at the Harvard Kennedy School, spoke of the power of markets in creating global change.

Markets, Aldy said, can be very fast and efficient, allowing entrepreneurs to bring new products to market and consumers to get the things they want and need. In a recent example of the power of the market, Apple Inc. has pre-sold millions of its new iPhone 5s even though the device doesn’t go on sale until Friday. Another illustration has been the shale gas-sparked transformation of the U.S. energy market in just a few years. Despite decades of hand-wringing over the prevalence of coal-burning plants in the U.S. electricity picture, a drop in the price of natural gas driven by rapidly expanding domestic supplies has reduced coal’s share and increased natural gas’ share of the electricity market just since 2008.

To combat climate change, Aldy said, a price has to be levied on carbon so that businesses recognize that emitting carbon dioxide is a cost of doing business. That cost will give businesses an incentive to minimize carbon dioxide emissions. This can happen, Aldy said, by levying a carbon tax, by creating a cap and trade regulatory scheme — where an overall limit is imposed by the government and tradeable permits to emit certain amounts are given to industry — or by imposing government clean energy standards.

Though the U.S. government has balked at putting a price on carbon, several states and regions are going ahead anyway, as are other countries, including Australia, New Zealand, and, in a pilot project, China.

“If we can harness the power of markets and really finally change the incentives for how we produce energy and how we consume energy, in doing so we can leave a better planet for our children and grandchildren,” Aldy said.