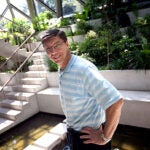 Film, inspired by Faust’s book on topic, premieres at Harvard

In a rare on-campus film premiere Tuesday, Harvard screened “Death and the Civil War,” a documentary by Ric Burns, co-producer of the acclaimed 1990 PBS series “The Civil War.” Burns said the new film was inspired by Harvard President Drew Faust’s book “This Republic of Suffering.”

The two-hour screening before a packed house was timed to start an hour before the film’s television premiere on the PBS history series “American Experience.” The event at the American Repertory Theater’s (A.R.T.) Loeb Drama Center capped four days of interviews and events for Burns and Faust leading up to the premiere.

On Monday, Faust appeared on “The Colbert Report,” where she told the blustery television host, “It’s never dumb to get an education.” Watching was Mark Samuels, executive director of “American Experience,” which is produced at WGBH in Boston. “You may lose her to television,” he quipped of Faust to the audience. “Last night she turned Stephen Colbert from an attack dog into a lapdog.”

Diane Paulus, the artistic director of the A.R.T., who introduced the screening and discussion session, announced the start of a three-year program to explore ways to dramatize the landmark conflict of 1861-1865, which is in its sesquicentennial years.

Though lush and gorgeous, the film was also sobering. Like Faust’s book, it captured the deadly scale of the Civil War, in which 3 million men were under arms in a nation of 31 million. By the end, 750,000 had died, 2.5 percent of the American population. In the South, 20 percent of men of military age died. “The dead, the dead, the dead — our dead — or South or North, ours all,” wrote Walt Whitman in “Specimen Days,” a reflection that is recounted early in the film.

Both the film and the book go beyond enumeration, to the toll that the war took on American families and culture, how it changed the accountancy of war, and shifted the habits of national remembrance. The film’s six segments say it all: “Dying,” “Burying,” “Naming,” “Honoring,” “Accounting,” and “Remembering the Dead.”

Families felt the Civil War’s effects first and hardest. Death on distant battlefields or in camps moved the experience from an intimate family setting to a haphazard public sphere, one dramatized by the new art of photography. Families no longer had the ingredients for “the good death” desired in a largely Christian culture, which included a body, a grave, and a minister.

Burying the dead in a ritual way goes back tens of thousands of years, said Thomas Lynch, an undertaker and poet who was interviewed in the film. “It’s what we do.”

Surprise, and a rising toll

In the film, Faust said, “Death was then very much a part of life,” and part of a culture in which there were four times as many churchgoers as voters. (Other historians and commentators appear in the film, which has a voice-over by actor Oliver Platt, including Harvard History Professor Vincent Brown, David W. Blight, George Will, Mark S. Schantz, and J. David Hacker.)

Death on the vast scale of the Civil War took everyone by surprise. When Southern troops attacked Fort Sumter in April 1861 to open the war, no one was killed, and only 15 were wounded. By June, the war’s death toll stood at 20.

Then, in August, the First Battle of Bull Run, known in the South as First Manassas, provided the first signs of the slaughter to come: 900 killed and 2,007 wounded. Then came Wilson’s Creek, Pea Ridge, and by the spring of 1862, murderous Shiloh, with 24,000 killed and wounded.

At the time, there were no national cemeteries, or graves registrations, or systems of identifying soldiers, or ambulance corps, or mechanisms for notifying families.

Letters from the era — the heart of both the film and the book — helped to make up for funerals that were not to be. In some cases, the letters even supplied another expectation of the day, a dying person’s last words. “Dear Mother,” one began, written by a grievously wounded soldier, “this is my last letter to you.”

Improvisations made the prospect of death more bearable, including pacts between soldiers to notify kin. “This is like Humanity 101,” said Lynch. Soldiers also wrote consoling letters to loved ones before battles. “I shall hope to survive and meet you again,” one man wrote to his wife. (He was killed that day.) Another letter, cited in both the book and the film, is a reminder of that era’s culture of masculinity, and the comfort it brought. One man wrote in advance of battle, assuring “I died like a man.”

Then there was illness, which accounted for two-thirds of the war’s death toll. Most dramatically, disease ravaged hasty encampments set up for “contrabands,” or slaves escaping to Northern lines. Blight, a history professor at Yale University, called the rude tent cities America’s “first version of large refugee camps.” In battle, black soldiers died at higher rates than their white counterparts. Of the 180,000 black Americans under arms, one in five died. Confederates also routinely killed black soldiers who surrendered, labeling them slaves in uprising.

Half of those who died in the war, Faust said in the film, were never identified. In part, that was because of crude battlefield burials, if there were burials at all, and because of the contempt each side eventually had for the other’s dead. At Antietam, 58 dead rebels were simply toppled into a well.

But during the war, five federal cemeteries were created following particular battles, including one at Gettysburg, the battle that Faust said “made the war national” by bringing it to Northern soil in Pennsylvania. But the toll at Gettysburg — with 6 million pounds of human and animal remains — also made slaughter more acceptable. By the spring of 1864, in one six-week period, about 65,000 soldiers were killed in battle.

After war, the work of burial

The last Confederate troops surrendered on April 26, 1865. “Our country,” the film said, quoting a writer, “was dark with sorrowing women.”

The long-term work of burying and accounting for those killed also began. The South in 1866 was “one vast charnel house of the dead,” wrote Union Army quartermaster Edmund Burke Whitman. A 1838 graduate of Harvard College, Whitman was charged with scouring battlefields to account for the dead, and went on to establish a structure for national cemeteries. His work accounts for some of the film’s most stunning images, including a patch of forest heaped with skulls.

But the film closed on a more optimistic sentiment that the dead of both sides would always be honored. “Their precious, precious blood” would live on, Whitman wrote in an 1865 poem, “in unseen essence and odor of surface and grass, centuries hence.”

After the lights went up, a panel assembled on stage: Faust, Burns, Brown, and Homi Bhabha, Anne F. Rothenberg Professor of the Humanities and director of the Mahindra Humanities Center.

People often think of World War I as the war that cost America its innocence, began Faust, but it was the Civil War that did so, and provoked an age of disbelief. The war also took an immense emotional toll. America in mid-19th century, she said, “was in a state of shock.”

But there is a lesson for today, said Burns: Bring death back into the national consciousness. During the Civil War and before, “Death was part of the experience we have,” he said. Now it is hidden.

There is another lesson for today, said Faust, one she realized only after seeing the film. In an American age that distrusts the idea of commonweal, the Civil War is a lesson on what “human ties can do for a nation,” and that sometimes society needs a reminder of Lynch’s notion of “Humanity 101.”

The film is a reminder of an ineluctable question, one that people cannot escape, said Faust: “What can we do for each other?”