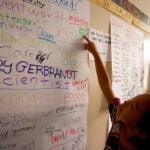 No summer lull in learning

Just after dawn yesterday at McCurdy Outdoor Track behind Harvard Stadium, 25 Army cadets stood in formation, ready for group exercise. Ten were students from Harvard. Clad in gray T-shirts and black shorts, they launched into an hour of stretching, push-ups, lunges, squat thrusts, and “high knees,” a heart-pumping exercise that resembles skipping.

The calisthenics, routine on any other day for cadets, marked the first time in 41 years that Reserve Officers’ Training Corps (ROTC) students have used Harvard campus facilities for their training.

On Thursday comes a footnote. Harvard will host the first military science class taught on campus since 1971. That year, in the wake of Vietnam-era protests, the University dropped ROTC as an official campus organization. The decision to renew on-campus ties with ROTC followed expiration of the “Don’t Ask, Don’t Tell” law, which had banned gays from the military. MS 101, an hourlong class in Hilles Hall, is an introductory course required of cadets, including those participating in the Paul Revere Battalion. That is the nine-school regional consortium unit, which includes Harvard, that is based at the Massachusetts Institute of Technology (MIT). The battalion supports training for 78 Army cadets in the Boston area. There are six sophomores and four freshmen from Harvard in the program.

“The resumption of ROTC training on campus marks a new phase in the historic relationship between Harvard and the military,” said President Drew Faust. “The increased activity will make the military experience more familiar to many of our students, and it will introduce them to the leadership opportunities that the ROTC has to offer.”

Harvard opened an ROTC office in Hilles Hall for a Navy unit last September. The University opened a second office on campus in March after renewing ties with the Army ROTC. But until yesterday, no formal training had taken place on campus.

“It’s definitely cool to be a part of the experience of ROTC coming back to Harvard,” said Charlotte “Charley” Falletta ’16, a freshman from suburban Buffalo, N.Y., who was three days into ROTC. She credited the ROTC sophomores at Harvard with clearing the way, saying, “They were the pioneers.”

Attending the U.S. Military Academy at West Point had been a possibility, “but it’s a really nice option to do ROTC here and get the Harvard experience,” said Falletta, 18. “I’m grateful — very grateful.”

“We tend to grow at Harvard after the first semester, as people find out about us,” said the battalion’s commanding officer, Lt. Col. Adam T. Edwards, a West Point graduate and 19-year Army veteran.

Dressed in his own workout gear, he stood to one side while the cadets — led by a rugged-looking junior from Tufts University — went through their exercises on the damp grass. A breeze swept the field, giving the chilly morning an extra bite. “As we continually preach to them,” said Edwards of the cadets, “the Army is an outside sport.”

The battalion will undergo two formal physical fitness assessments this year, the first in late October. The test involves two minutes of push-ups and sit-ups, along with a two-mile run.

“It’s introductory,” said Edwards of Monday’s training, just as the first military science classes are an introduction to service fundamentals. “We’re looking at overall fitness. To be an Army officer, you have to be fit to survive and thrive on the battlefield.”

Edwards, an engineering officer, has had two tours of duty in Iraq and one in Afghanistan. He also was once deployed to Bosnia.

“Good physical fitness also helps with mental fitness,” he said. “Officers are the thinkers and planners of the Army, and to do that you need to be physically fit.”

Finishing the session but not even breathing hard, Adam Hotchkiss ’15 added a similar observation. Although a sophomore, he too is in his first week of training. “ROTC gives you a good balance between your hard academic studies and being physically fit,” said the Currier House resident from near Rochester, N.Y. “ I think physical fitness coincides with your mental health.”

The commitment to ROTC — with its early hours, tight structure, and physical demands — will help with the mental effort of studying, said Hotchkiss, 19, who is considering a neurobiology concentration. “Being at Harvard last year as a freshman was very difficult academically. At times, I found myself not motivated mentally.”

Changing that involves “forcing myself in this disciplinary manner,” he said of ROTC, which means morning homework and an improved sleep cycle. “I never would have gotten up this early last year.”

The workouts, which are required three mornings a week, will get tougher, said Edwards, whose career included Army Airborne Ranger training at Fort Bragg, N.C. “We’ll ramp it up, make it more difficult.” He looked over at the cadets, who were doing one-armed push-ups.

The workouts will be at Harvard on Mondays, at MIT on Wednesdays, and at Tufts on Fridays.

In the classroom, cadets will experience a series of what Edwards called “labs,” or practical training sessions. Included are “combat lifesaver” training, which is first aid; land navigation; and a three-day field training exercise in October at Fort Devens, west of Boston. Between the junior and senior year in Army ROTC comes “LDAC,” the Leader Development and Assessment Course at Fort Lewis, Wash., which includes 29 days of continuous outdoor training meant to simulate a deployment.

At Harvard and elsewhere, the basic ROTC mission is to give students increasing amounts of responsibility, because all non-classroom activities are cadet-run. Said Edwards of ROTC, “We’re a leadership laboratory.”