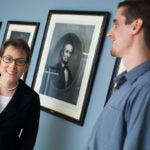 Influx of alien pests, diseases are attacking region’s trees at a rising rate

New England’s moist, tree-friendly climate ensures that the region’s forests will endure, but a parade of introduced pests and diseases also ensure that the region’s 33 million acres of trees will continue to change as species rise to replace those affected, experts said.

The disruption and recovery of an ecosystem after the introduction of a new pest species is a natural process that has played out before in the region, according to Harvard Forest Director David Foster. Reconstructions of the region’s forested past have shown dramatic declines of hemlock and oak 5,000 years ago, likely related to the interplay of climate change and insect pests.

The historical evidence, however, also indicates that forest-transforming diseases and pest outbreaks are also naturally rare, giving forests time to recover between episodes. That leisurely pace has been lost since the mid-1800s. Since then, 400 new species of insects have been introduced into the region, and new diseases have taken an enormous toll.

Northeastern forests have lost what was a dominant tree, the American chestnut, a forest giant that stood up to 150 feet tall and 10 feet in diameter. Chestnut blight, imported from Asia, killed billions of trees and eliminated what had been an important food source for a host of animals. Similarly, Dutch elm disease has devastated American elms, another large forest tree that had been heavily planted in cities and towns.

“Many towns have Elm Streets. Most Elm Streets have no elms on them,” said David Orwig, a researcher at Harvard Forest specializing in invasive species.

Orwig and Foster spoke about invasive species’ effects on New England forests during a Sept. 19 talk at the Harvard Museum of Natural History. The session, co-sponsored by the Arnold Arboretum, took place in the Geological Museum building.

New England forests face a veritable “who’s who” of pests and pathogens, Orwig said. Front and center are insects that have been in the news recently, including the hemlock woolly adelgid, the Asian long-horned beetle, the winter moth, and the emerald ash borer.

The hemlock woolly adelgid, a tiny, sap-sucking insect originally found in Japan, is spreading across New England and attacking another of the forest’s large trees. The evergreen hemlock, which grows to 100 feet tall and 5 feet in diameter, has shown no resistance to the pest, which also has no known native predators.

The loss of the hemlock is important, Orwig and Foster said, because it is a species that controls the nature of the forest around it. Loss of hemlocks creates an opening that black birch seem to be most commonly filling, triggering a cascade of changes in soil, vegetation, and animal composition. The only control on the pest has been northern winters, but temperatures have to be well below zero to kill the bug. The pest has “really blown up” this summer owing to last winter’s warm temperatures, Orwig said.

The Asian long-horned beetle has been in the news a lot recently, with an outbreak near Worcester causing the felling of 30,000 trees, and a smaller outbreak in Boston leading to the felling of six trees. The beetle’s ability to infest several host species worries officials, though drastic control measures have so far appeared to be effective. The difference in the number of trees felled in Worcester, where the infestation was advanced, and Boston, where it was just beginning, illustrates the importance of catching infestations early, Orwig said.

The emerald ash borer might be the most worrisome pest today, Orwig said. It is a good flier that rapidly kills ash trees. In just 10 years, it has killed millions of trees in 18 states, including Massachusetts, where an outbreak was detected in the southwestern part of the state this summer. Eight billion trees are threatened.

“That’s an incredible spread in 10 years,” Orwig said. “The emerald ash borer, in my opinion, is out of control.”

Responses have taken a variety of forms, including biological controls that focus on finding native predators or diseases from their home country and introducing them to the area. That doesn’t always work, however, and carries the risk of unexpected side effects, such as the newly introduced control insect also feeding on other native species. Control with chemical pesticides and fungicides can also work, but is usually limited to smaller landscaping uses rather than forest-scale preservation efforts.

Cutting infested trees, either to remove the threat or salvage wood, can be effective, as it appears to have been with the Asian long-horned beetle, but it can also backfire, removing potentially resistant individual trees, which might be the foundation for a recovering population, along with those infected.

“Sometimes our choices can make the situation worse. We need to be cautious about knee-jerk reactions,” Orwig said.