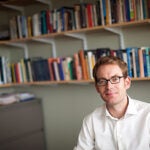 It is hard to overstate the importance of Alan Turing, the British mathematician who died in 1954. He was a hero in science, for one. Turing invented the concepts that underlie modern computers and artificial intelligence. And he was a hero in war: He was a vital part of the British cryptographic team at Bletchley Park that cracked the German Enigma code during World War II.

Harvard is celebrating Turing’s centenary year with “Go Ask A.L.I.C.E.,” an exhibit of “Turing Tests, Parlor Games, and ChatterBots,” which opened Tuesday and will run through Dec. 20 in the Science Center, Room 252.

Gerald Holton, professor of the history of science emeritus and Mallinckrodt Professor of Physics, was among the first visitors to the exhibit, minutes after it opened. He stood in front of one of the interactive machines and asked no one in particular, “Can we break the Enigma code?”

The exhibit is visually appealing, full of information, and even fun, said Holton, who is 90, and who said Turing’s work in computational science was “a turning point in modern civilization.” Then he looked down for a moment. “But I can’t help feeling some sadness at his demise.” Turing was only 41 when he died, an apparent suicide. Not long before, Turing had been convicted of “gross indecency” for being a homosexual. He lost his security clearance and in lieu of prison was forced to undergo hormonal therapy.

“He was turned against by a country to which he devoted his every force,” said Joseph Pellegrino University Professor Peter Galison. “It still seems medieval to me.”

But the exhibit takes a lighter touch. “We wanted some gestures to that part of the story without making it central,” said co-curator Stephanie Dick, a Ph.D. student in the history of science program at the Graduate School of Arts and Sciences.

“Go Ask A.L.I.C.E.” is sponsored by the Collection of Historical Scientific Instruments, where Galison is director, and was funded by the David P. Wheatland Charitable Trust. Also co-curating the show are history of science assistant professor Sophia Roosth and department Ph.D. student James Bergman.

A.L.I.C.E. is an acronym with at least 15 scientific and military meanings. But in Turing’s world, it stands for Artificial Linguistic Internet Computer Entity. “ChatterBot” is related slang, describing a program intended to allow computers to engage in small talk.

The possibility of human-machine interaction was one of Turing’s most durable fascinations. (The exhibit calls it “the dream of a common language,” a Turing-inspired idea. It defied the notion that computers are intended only to process numerical data.)

The exhibit traces Turing from his boyhood in colonial India and at two British boarding schools, through his landmark theories of the 1930s, and into his wartime science, when the Bletchley research helped to shape computers as we know them.  The show moves into the 1950s, when he conceived what most people associate with him: the Turing Test. It’s designed to gauge the likelihood of a machine having what could be described as intelligence. Turing introduced the test in a 1950 paper that began, “Can machines think?”

All that Turing did was governed by “exchanges between people,” said Galison, and then he went in search of a way for machines to “respond indistinguishably” from humans. “The Turing Test was a way to take thinking out of the domain of the metaphysical and make it into a communication act.”

But can communication happen without affect? The exhibit is designed to inspire questions like that, and to make people think about communication generally, said student and co-curator Bergman. For one thing, “We interact so often with machines now, and we often ascribe to them human qualities. We were able to drill down on a lot of history of this.”

Turing’s question about thinking machines arose, in part, because of an earlier fascination: harnessing human computational power en masse in something he hypothesized in 1936 as the Universal Turing Machine. (The word “computer” did not apply yet.) The exhibit includes a well-worn bound copy of the original 1936 paper in the Proceedings of the London Mathematical Society, as well as something Turing never saw in his own lifetime: a model by artist Mike Davey of what his machine might look like, with its 1s and 0s and its spool of tape “of indefinite length.”

But if machines can calculate automatically and speedily, Turing thought, perhaps they could also communicate: to have textual exchanges with humans that simulate, in the words of the exhibit, “intuition, emotion, and consciousness.”

“Go Ask A.L.I.C.E.,” with its several interactive stations, is designed to test that idea and to demonstrate its iterations through time. Viewers can sit down and take the Turing Test. Type a greeting, and you will get an answer. Is it from a real person at a computer terminal, or from a machine? You decide.

Viewers can also take a close look at two on-loan Enigma machines, the stout steel-and-wood devices the size of hatboxes that almost defeated the Allies in WWII. “It seemed like a key object for us,” said Roosth, the professor and co-curator.

Viewers can handle punch cards, the heart of computation machines through the 1960s. (The categories “hole” and “no hole” were the equivalent of the binary “1” and “0”.) Visitors can read about natural language processing schemes that ease communication with computers, including LISP from 1962.

And viewers can browse some of the ways that artificial intelligence was seen in the mainstream press, and in what the exhibit curators call the “fantasy, desire, and paranoia” of science fiction. In those realms, communicating machines can be helpful servants, like C3PO from the “Star Wars” trilogy. Or they can be enemies masquerading as people, like the bioengineered faux humans in “Blade Runner.”

Servant, enemy — or fake? In one corner of the exhibit, Ben Kuhn ’15 wanted to find out. He turned on a Depression-era teletype machine of the type Turing had used. The C3PO-size machine warmed up with a deep hum, and Kuhn typed out a greeting on the clacking old keys. “Hi Alice.”

An answer chattered back, typed in ink on a roll of paper: “The explanation is rather complicated.” Kuhn, who wrote the teletype machine chatterbot software, was gentle with his computer interlocutor. “Writing something to simulate a human is really hard,” he said.

Alice did better with another question, “Why does the sun rise?” Logically, and from a firm dataset, Alice replied: “The Earth rotates.”

Still, Turing had launched an idea: Develop human-machine interactions that sound real. The exhibit points to one such advance, the ELIZA computer program developed during the 1960s at what was then the MIT Artificial Intelligence Laboratory by Joseph Weizenbaum (1923-2008). The concept was to simulate the responses a therapist might have in an intimate conversation. But Weizenbaum was dismayed when his secretary asked to be left alone with ELIZA so she could have a real conversation. “No one understands,” said a frustrated Weizenbaum later. “No one is there.” By the 1970s, he was a critic of the limitations of artificial intelligence.

In his own day, Turing asked an even bigger question about communication, in part inspired by the death of a friend in childhood, and the longing for his company: Could there be human interaction without the human body — by the spirit alone? But he concluded there would be “nothing to do.” Turing’s rumination included a list of all the things missed in spirit-to-spirit communication, said Roosth. “Food and sex were foremost.”

“Go Ask A.L.I.C.E.” is accompanied by two identical performances on Sept. 19 and 20, from 6 to 8 p.m. at Science Center 251. First, there will be live demonstrations of an Enigma machine and the Turing Machine. At 7 p.m., there will be an original theater piece using transcripts of human-computer dialogue. For more information.