Where sand and sun meet science 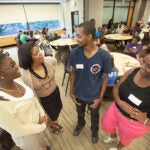 Teens learn and earn at Harvard

Summer volleyball league gets researchers out of lab, onto sand

For more than 20 years, the inhabitants of Harvard’s labs have ducked outside after Commencement, playing weekly games through the end of August.

Science comes first for most of the year, but when warm weather rolls around, wins and losses on the volleyball court give lab results a run for their money.

“You get ‘street cred’ in our department from your volleyball record and your teaching scores. We’re highly competitive on both fronts,” said John Rinn, assistant professor of stem cell and regenerative biology, after a steamy mid-August game. He looked at David Kelley, the tall postdoc standing next to him, and quipped, “I hired him for his net skills.”

The hourlong weekly games build camaraderie among lab members, Rinn said, giving them a break from their work hunting for new human genes, as well as a bit of exercise.

“For us, it’s kind of a lab outing once a week,” said Rinn. “I moved to this campus two years ago, and this is one of the best parts about it, the interface with all the different labs in a fun and competitive way.”

Rhino League Commissioner Lance Schumacher, a technician with Harvard’s Office of Environmental Health and Safety, recalls seeing the volleyball court on the way to his job interview and describes something akin to love at first sight.

“I walked through the alleyway and saw the court. I said, I better get this job,” Schumacher said.

The league’s murky origins stretch back to an ’80s community-building effort by Cabot Professor of Biology Richard Losick, whose group played teams from other labs on a rough court in the Biological Laboratories’ courtyard.

“My lab’s best year was when we had some undergraduate ringers, but we have never won the cup, to my frustration,” said Losick, who still fields a team. “When I was younger, I used to play, but now I volunteer my services to the opposition. They never accept.”

The league, named after the life-sized bronze rhino statues that have flanked the Bio Labs’ entrance since 1937, is open to all Harvard ID holders and includes a significant part of Harvard’s Cambridge-based scientific community, with 300 to 400 participants on 39 teams. The league remains dominated, however, by teams from the chemistry and biology labs in the buildings nearby.

After weeks of regular season play, teams this month are deep into the double-elimination playoffs. The last four teams standing will face off in the finals on Aug. 29, with the winner getting the Rhino Cup, which shows the animal perched on a lab cylinder while balancing a volleyball on its horn.

As commissioner, Schumacher — who wants to have his title changed to Rhino League “Czar” — manages the complex schedule and settles disputes, with an eye more toward fairness and fun than hard-core competition.

Most of the league’s rules have grown organically, in response to complaints over the years, Schumacher said. Games are played by pre-1999 rules, with scores to 15 and only the serving team able to score points. To even out competition, different divisions were established to separate teams more interested in competition from those mainly interested in fun. To keep the four- or five-games-a-day schedule running smoothly, the games go on rain or shine — unless there’s lightning. And to keep teams from bringing in ringers, players have to hold that Harvard ID, though there’s one exception: Past players are always welcome.