The tangled web around spiders 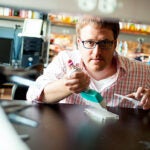 An Indian biologist with a passion for spiders took a Harvard Museum of Natural History audience on a tour of arachnids large and small Monday, delivering a colorful peek at their diversity along with a plea for their conservation.

Spiders have a long history, with primitive species arising 360 million to 400 million years ago, gradually evolving small, light, hairy bodies, the ability to weave silk, and other characteristics.

With eight legs and two main body parts, spiders are different from insects, on which many of them prey, and which have three body parts and six legs. With eight eyes, spiders have 360-degree vision which, coupled with poison-injecting fangs, makes them formidable predators.

Spiders, Seenappa said, are misunderstood and often killed unnecessarily. While some spider bites can be dangerous, Seenappa said that the vast majority of the 42,000 known species are harmless to humans, with fangs incapable of penetrating our skin. Though they’re natural pest control agents, they are killed alongside problematic insects by broadcast pesticide spraying.

Seenappa said 15 species of spiders are threatened with extinction, including some tarantulas and wolf spiders. Still, he said, so little is known that there are certainly species that are undescribed and whose conservation status is unknown.

Though he is a trained biologist — an immunologist — his interest in spiders came not in the classroom or the lab, but through photography. He began taking pictures of spiders and became fascinated by them. He told of sitting up late one night to watch a spider spin its web, a process that began after 1 a.m. and lasted 45 minutes.

Seenappa’s images depict a wide variety of spiders, including a large, striking tree spider, Nephila pilipes, that spins its web, which can reach five meters wide, between two trees; colorful crab spiders that lie in wait in flowers to ambush pollinators; and wolf spiders that jump on prey rather than trapping them in webs. Nephila is a species with a large variation in size, ranging from five-inch females to tiny males, which are are sometimes consumed by the females.

In addition to agricultural pesticides, spiders are threatened by deforestation and global warming, Seenappa said. Many species have narrow ecological niches and little ability to disperse, making them vulnerable.

“Global warming is a major problem. Spiders have no protection,” Seenappa said.