Tapping the body to fight disease 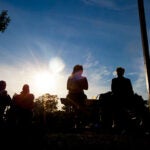 Researcher works to harness the power of bone marrow cells

Biju Parekkadan saw his future in the plight of a newborn thousands of miles away.

It was 2008, and Parekkadan, then a graduate student in the Harvard-MIT Division of Health Sciences and Technology, was in India on an “observership,” becoming familiar with health issues in the giant Asian nation.

Parekkadan had talked with a doctor there of his research, which uses a type of adult stem cell to calm the body’s attacks on its own damaged tissue after injury. The research has potential for treating kidney and liver failure, inflammatory bowel disease, and other ailments.

But Parekkadan wasn’t sure whether to continue that work or head to medical school to pursue his lifelong dream of becoming a physician.

So the doctor took him to the neonatal intensive care unit to show him the potential impact of his research. A baby they examined that day was healthy but had been orphaned when its mother died of liver failure in childbirth.

“He asked me, ‘When are we going to get what you’re working on?’ ” Parekkadan recalled.

Parekkadan set aside thoughts of medical school and dedicated himself to the lab. He has made considerable progress in just a few years, working to bring therapy based on a type of bone marrow stem cell, called mesenchymal stem cells, closer to use by physicians to treat patients suffering from acute kidney failure. He has developed a product, currently in large animal testing, that he hopes to begin testing in humans as early as next year.

“I thought that a singular focus [on research] would be more important,” Parekkadan said. “I came back from India, graduated, and said, ‘It’s time to take this to the next level.’ ”

Now an assistant professor of surgery at Harvard Medical School (HMS) and Harvard-affiliated Massachusetts General Hospital (MGH) as well as a staff scientist at nearby Shriners Hospital for Children, Parekkadan is investigating new treatments using cells instead of the molecules found in drugs. His field of cellular therapy, while less common than molecular therapy, has been around for many years in procedures such as bone marrow transplants to treat cancer.

Parekkadan, who grew up in New Jersey, said he was in high school in the mid-1990s when he felt the pull of genetic engineering.

“I was just amazed. I could not believe you could control a biological thing in this way. I tried to anticipate what the world would look like” in the future, Parekkadan said.

While an undergraduate at Rutgers University, Parekkadan became interested in the potential of cell-based therapy — specifically, embryonic stem cells  — to treat disease. As a graduate student, however, he decided to investigate other types of cells that were in clinical use and became intrigued by reports that mesenchymal stem cells altered patients’ immune systems.

Guided by his doctoral dissertation adviser, Martin Yarmush, lecturer on surgery at HMS and director of MGH’s Center for Engineering in Medicine, Parekkadan showed that these cells had properties that could be used to fight organ failure and immune-system malfunction.

“I served as his thesis adviser, which was both an honor and a pleasure. When he finished, we offered him a postdoctoral fellowship. He did extremely well as a postdoc, so we promoted him to instructor and promoted him again,” Yarmush said. “I think Biju came to the realization that he really has a talent in research that gives him a great deal of satisfaction. He made the right choice, in my estimation.”

Parekkadan’s lab has searched to find the active molecules secreted by the cells, and the lab has identified several promising candidates that could be useful as therapeutics on their own. But Parekkadan also showed early on that cellular therapy may be greater than the sum of its parts for treating certain severe diseases that have proven difficult in single-molecule approaches. He built a setup that coupled his cellular therapy with kidney dialysis, a method for filtering blood through an external machine, a job normally handled by the kidneys. The device cleaned the blood and ran it past the mesenchymal stem cells to collect the mixture of proteins the cells were secreting and to carry the proteins back into the body.

In testing on lab rats, the technique worked well enough that Parekkadan decided to commercialize the technology and co-founded Sentien Biotechnologies Inc. of Medford.

“The advantage of using a cell is that it can secrete many things at once in a dynamic and reactive manner,” Parekkadan said. “What’s going on in the patient is multifactorial. Their kidneys are damaged … and the immune system is beating on the kidney. These cells make proteins that influence each of these conditions.”

Parekkadan’s lab at the MGH Center for Engineering in Medicine has a team of postdoctoral fellows and research technicians working on several projects, each with an emphasis on quick translation to clinical research and patient care.

Another project provides a three-dimensional environment where bone marrow cells that give rise to blood cells can be grown outside of the bone. Currently under development in laboratory mice, this project would make the stem cells — which are used in bone marrow transplants — easier to grow, study, and manipulate.

In July, that project garnered Parekkadan a Presidential Early Career Award for Scientists and Engineers, which comes with National Institutes of Health funding and a visit to the White House, complete with a handshake and conversation with President Barack Obama.

“We try working on things where there’s a critical need,” Parekkadan said. “I was amazed, very humbled, and honored by [the award]. It really fueled the fire.”