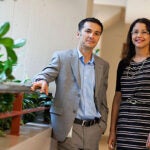 Harvard researchers say they have discovered a new approach that could “drastically simplify” the process of designing drug cocktails to battle everything from bacterial infection to cancer and even HIV.

As described in a paper published in the July 24 issue of the Proceedings of the National Academy of Sciences, a research team led by Philippe Cluzel, professor of molecular and cellular biology and Gordon McKay Professor of Applied Physics, found that by studying how drugs interact in pairs, researchers can predict how larger combinations will interact.

“This approach could significantly simplify the current development process,” said Kevin Wood, postdoctoral fellow in molecular and cellular biology and lead author of the paper. “Characterizing the effects of drugs, both individually and in pairs, remains essential, but this research suggests that once you have that information, it may be all you need. The results could open the door to the systematic design of candidate multidrug therapies.”

Although doctors and researchers have long used drug “cocktails” as a way to avoid the development of drug resistance, the development of such therapies can be tricky. When drugs are administered on their own, their effects are generally well understood. When combined, Wood said, the results are often unexpected and can be highly counterintuitive.

To crack the code, Cluzel and his team took an unexpected approach. Using 19 drugs — ranging from aspirin to commercial preservatives to commonly prescribed antibiotics — researchers first tested what effect the drugs, alone and in combinations, had against cell growth in two common types of bacterial infection, E. coli and S. aureus.

The team’s unconventional approach was made possible by its authors’ diversity of expertise. Satoshi Nishida is a microbiologist and Harvard associate, and Eduardo Sontag is a mathematician at Rutgers University. Wood trained as a physicist and, as a postdoctoral fellow, has broadened his expertise to microbiology. “Kevin’s adeptness in microbiology, physics, and math is what made this study possible,” said Cluzel, “The FAS Center for Systems Biology is a unique place that strongly fosters interdisciplinary projects.”

Until now, Wood said, the only way researchers had of reliably assessing the effects of such drug combinations was simple: Test every possible combination of drugs at every possible dosage. But that method is incredibly time-consuming, often requiring thousands, or even millions, of individual tests.

As an example of how complex the problem can become, Wood pointed to the 19 drugs tested in the paper. To test every combination at just three dosages, he said, would require nearly 1 billion experiments. The method outlined in the paper would require only about 1,600.

“These findings are pretty remarkable,” he said. “Once we know how the drugs interact in pairs, we can predict the way they interact in larger numbers. When we combine three drugs, or more, the effects are simply an accumulation of the effects we saw at the pair-wise level.”

Going forward, Wood said, researchers hope that the technique outlined in the paper could dramatically simplify the process of designing new multidrug therapies.

“These types of drug cocktails are where we are headed, partly as a strategy to avoid drug resistance,” he said. “If you have a large number of drugs to choose from, it quickly becomes infeasible to determine the effects of all combinations. With this technique, however, a formerly intractable problem becomes experimentally within reach.”

The study was focused solely on combating bacterial infections, but future research efforts will likely focus on areas — such as cancer and HIV treatment — where drug cocktails are commonly used.

“We have a number of areas to continue studying. One is to understand the theoretical justification of the approximation. Why does this approach work, and what does it tell us about cell biology?” Wood said. “But from a practical standpoint, we’d also like to extend this into other types of cells, and other types of infections.”