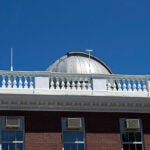 Stars in the making

New book tracks its spread, as well as its effects in biology, chemistry, and public health

Humans have known about mercury’s toxicity since ancient times, when work in mines that extracted cinnabar — the blood-red, mercury-containing ore — was considered a death sentence.

Though powdered cinnabar was commonly used as a paint pigment, its toxic properties were also used to advantage. The powder was sprinkled in tombs of ancient rulers to preserve their remains and was used in ancient India to preserve scarves.

Today, scientists know much more about mercury than the ancients did. Its relentless travels in the environment have been traced from natural and industrial sources to sediments and through the food web as it has grown increasingly concentrated, passing from prey to predator to larger predator.

The dangers of mercury poisoning have been highlighted in several prominent cases, such as that in Minamata, Japan, where thousands of members of the local fishing community were debilitated by decades of industrial releases into nearby waters. Mercury interferes with the central nervous system and can damage kidneys and lungs.

In the United States, there are health warnings for vulnerable populations, like young people and pregnant women, cautioning them against eating too much of certain fish, including predators such as tuna and swordfish, out of concern that mercury accumulated in the fish flesh could be harmful.

Now, a new book with a number of contributors and edited by a Harvard staff member, Michael Bank, highlights this history and explores what happens to mercury when it is released into the environment. The book outlines mercury’s public health dangers for a new generation of students and researchers.

Bank, a research auditor at Harvard Medical School (HMS) who also conducts his own research on the subject, spent the past three years developing the book project and shepherding it through to completion. Titled “Mercury in the Environment: Pattern and Process,” it was released by the University of California Press.

The book’s chapters cover an array of mercury-related topics, including the use of mercury by ancient civilizations, fate and transport of mercury in different ecosystem types, atmospheric sciences, isotope chemistry, toxicology, risk assessment, and public health.

“We truly need a broad perspective to understand the magnitude of this important environmental health issue,” Bank said.

Bank, who received a Ph.D. from the University of Maine in 2005, conducted his dissertation research on contaminant biology and species loss while a research assistant at Harvard Forest, followed by a four-year postdoctoral fellowship at the Harvard School of Public Health on mercury in fish from the Gulf of Mexico.

Bank said that although the United States has recently made important strides developing policies to reduce mercury emissions, that’s not the case for much of the world. Mercury in compact fluorescent light bulbs is becoming a larger problem because of their increased popularity. A major global source remains coal-burning power plants around the world, particularly in Asia, where coal is an important fuel for rapidly growing economies. Mercury in the coal is released into the atmosphere when the coal is burned. Once in the atmosphere, prevailing winds carry it around the globe.

In 2004, Bank gave a talk on the subject at a conference, after which some audience members urged him to compile a book. From there, he put the proposal together, lined up the experts who authored the book’s chapters, co-authored a chapter on mercury toxicology, edited the volume, and shepherded it through a peer-review process that examined individual chapters as well as the entire book.

The book takes an in-depth look at the public health issues involving mercury and provides linkages to many of the other scientific disciplines utilized to study this widespread contaminant. Bank said it was important to use a multidisciplinary approach, focusing on chemistry and biology as well as public health and environmental health science.

There’s much that is still unknown about mercury in the environment, Bank said, citing research that found elevated mercury levels in salamanders from national parks and in songbirds in remote, high-elevation areas, likely from the insects they eat, highlighting yet another way the metal is moved through the environment. Bank said he will develop a second edition to provide updates and keep the volume current.