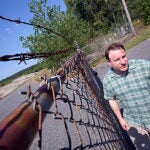 Some women’s vulnerability to anxiety and mood disorders may be explained by their estrogen levels, according to new research by Harvard and Emory University neuroscientists presented in this month’s issue of Biological Psychiatry.

Low estrogen levels can make women more vulnerable to trauma at some points in their menstrual cycles, while high levels of the female sex hormone can partially protect them from emotional disturbance, the research suggests. Since birth control pills affect estrogen levels, they might one day be used to help prevent post-traumatic stress.

Depression and anxiety disorders are twice as common in women as in men, but the reason for this gender difference is unclear. The new work, reviewed by Harvard’s Mohammed Milad and colleagues in a commentary, suggests that women are most at risk for symptoms of post-traumatic stress disorder (PTSD) when their estrogen is low during the menstrual cycle.

“PTSD is a disorder of recovery,” said author Milad, associate professor of psychiatry at Harvard Medical School (HMS) and director of the Behavioral Neuroscience Laboratory at Massachusetts General Hospital (MGH). Men may be less at risk because testosterone, the male sex hormone, is converted into estrogen in the male brain, and so is more stable in their brains than in women’s.

Estrogen calms the fear response in healthy women and female rats, according to the Harvard researchers, who were led by Kelimer Lebron-Milad, an HMS instructor of psychiatry. The Emory researchers, led by postdoctoral researcher Ebony Glover, showed that the same is true for women suffering from PTSD. The higher the estrogen was in their blood when they trained on a fear-extinction task, the less likely women were to startle.

Both studies used “fear-conditioning” paradigms, in which the subject is trained to fear a safe “conditioned stimulus” such as a colored shape, paired with a frightening or painful “unconditioned stimulus” like a finger-shock or a puff of air to the neck or eye. In both studies, women or female rats showed less fear response to the neutral stimulus when estrogen was high than when it was low.

PTSD is common in women after a trauma such as rape or sexual assault, which studies say are experienced by 25 to 30 percent of women in their lifetimes, and the symptoms last on average four times as long in women as in men after trauma. This new research suggests the reason for this susceptibility may be the monthly menstrual change in estrogen.

“People are afraid to look into the influence of sex hormones on ‘fear learning’ and extinction,” said Mohammed Milad, “because it’s such a complex system.” When Milad studied fear as a Ph.D. student, his lab used only male rats. But when he began to study fear in humans as a postdoctoral researcher, he saw that female data were much more variable. “The data led me there,” to sex differences, Milad said. “Since females add variance, scientists have tended to avoid studying them” in rodent research, he said. Studies of the human brain have tended to combine men and women, assuming that neurological gender differences are minimal. But this assumption is changing.

“Big boats turn slowly, but this boat is turning,” said Larry Cahill, professor of psychology at the University of California, Irvine, and author of a 2006 review titled “Why Sex Matters to Neuroscience.” People have avoided studying gender differences for social reasons as well as scientific ones, Cahill said, because sex differences have been considered politically taboo. In the 1970s, Cahill said, studying sex differences could get a researcher “excommunicated from academia,” because the assumption was that such differences in the brain were minimal, and it was politically incorrect to suggest otherwise.

“Right now, people are struggling to grow past their biases,” Cahill said. But the result of understanding gender differences should be better health care for women, with treatment tailored to a woman’s needs, including the point in her menstrual cycle.

Birth control pills, in particular the emergency contraceptives known as “morning-after pills,” might be used to prevent post-traumatic stress after an assault, researchers say. This was the conclusion of a study by Cahill’s lab, published this year in the Journal of Forensic Nursing. The study, whose first author was Nikole Ferree, questioned 111 sexual-assault survivors six months after their traumas, and found that those who had taken an emergency contraceptive showed fewer symptoms of PTSD. The drug Ogestrel (which includes both estrogen and progesterone), as opposed to Plan B (estrogen alone), was particularly effective.