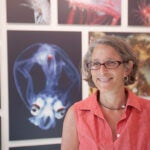 PETERSHAM, Mass. — The authors of a Harvard study published today in Nature Climate Change gathered their data from an unlikely source — the trip accounts of the Massachusetts Butterfly Club. During the past 19 years, the amateur naturalist group has logged species counts on nearly 20,000 expeditions throughout Massachusetts. Their records fill a crucial gap in the scientific record.

Once analyzed, the data show a clear trend. “Over the past 19 years, a warming climate has been reshaping Massachusetts butterfly communities,” notes Greg Breed, lead author on the study and a postdoctoral fellow at the Harvard Forest in Petersham.

Subtropical and warm-climate species such as the giant swallowtail and zabulon skipper — many of which were rare or absent in Massachusetts as recently as the late 1980s — show the sharpest increases. At the same time, more than three-quarters of northerly species (species with a range centered north of Boston) are now declining in Massachusetts, many of them rapidly. Most impacted are the species that overwinter as eggs or small larvae, indicating that these overwintering stages may be much more sensitive to drought or lack of snow cover.

The study creates new questions for managing threatened species. “For most butterfly species, climate change seems to be a stronger change-agent than habitat loss,” says Breed. “Protecting habitat remains a key management strategy, and that may help some butterfly species. However, for many others, habitat protection will not mitigate the impacts of warming.”

Breed points to the frosted elfin, a species that receives formal habitat protection from the state. This southerly distributed butterfly is now one of the most rapidly increasing species in Massachusetts, with an estimated 1,000 percent increase since 1992. Some of this increase may be due to habitat protections, Breed allows. But over the same period, atlantis and aphrodite fritillaries, historically common summer butterflies in Massachusetts, have declined by nearly 90 percent — yet these northerly species remain unprotected.

The kind of information collected by the Massachusetts Butterfly Club is becoming increasingly valuable to scientists and land managers alike. Elizabeth Crone, senior ecologist at the Harvard Forest and another co-author on the study, notes, “Careful datasets from amateur naturalists play a valuable role in our understanding of species dynamics. Scientists constantly ask questions, but sometimes the data just isn’t there to provide the answers, and we can’t go back in time to collect it. This study would not have been possible without the dedication and knowledge of the data collectors on those 19,000 club trips.”