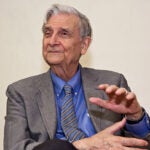 ‘Literacy and Mothering’ co-written by HGSE professor and former students

“Literacy and Mothering: How Women’s Schooling Changes the Lives of the World’s Children” by Robert A. LeVine, Sarah LeVine, Beatrice Schnell-Anzola, Meredith Rowe, and Emily Dexter has won the 2013 Eleanor Maccoby Award by the American Psychological Association.

The book reports research undertaken over several decades at the Harvard Graduate School of Education (HGSE); a feature article on the Nepal part of this work appeared in the Gazette in 1997.

Robert LeVine is the Roy E. Larsen Professor of Education and Human Development Emeritus at HGSE; Sarah LeVine is a former research associate there; and the other three co-authors are former students who received their Ed.D.s at Harvard. The book is the final report of the Project on Maternal Schooling at HGSE, and it presents a new interpretation of evidence bearing on the impact of schooling on maternal behavior, particularly in the developing world.

“My co-authors and I are deeply gratified by this award from the Developmental Psychology section of the APA,” said Robert LeVine. “I am particularly honored because Eleanor Maccoby, after whom the award is named, taught me child psychology at Harvard in 1954. Our hope is that ‘Literacy and Mothering’ will generate a new interest in the impact of women’s schooling and lead to a more complete understanding of the processes involved.”